Custer's Last Stand from both sides 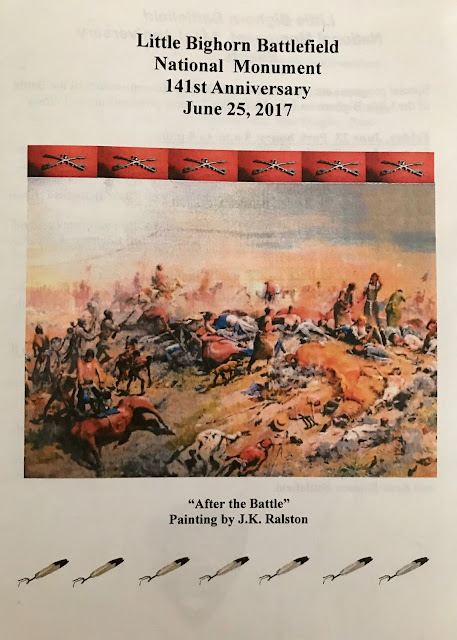 When we left Wyoming for the 70-mile drive to Montana to see Little Bighorn Battlefield National Monument, site of Lt. Col. George Armstrong Custer's famed last stand, we had no idea it was the 141st anniversary of that battle, June 25, 1876.

We lucked into a gathering of historians, interpreters and descendants of the Great Plains tribes  - the Lakota, the Cheyenne and some Arapaho - that fought to preserve their nomadic way of life.

You can see why they didn't want to move. It's called steppe land, gently rolling hills of high grass that graduate from "steps" of mesa-like rises to foothills then mountains that were sacred to the people who lived on their flanks. Interspersed with creeks and rivers with treed banks, it is ideal for the herds of horses and buffalo that sustained the tribes.

Like most interaction between the settlers and Native Americans, it is a sad story of promises made and broken. This had been designated by treaty Plains tribes' land but when gold was discovered in the Black Hills, the government decided to move the Plains peoples to another reservation. Despite having vowed to never raise his gun against a Cheyenne ever again, Custer entered the fray.

Typical of all National Park properties, this one is beautifully done with a National Cemetery for all war dead,

an obelisk atop Last Stand Hill memorializing the soldiers 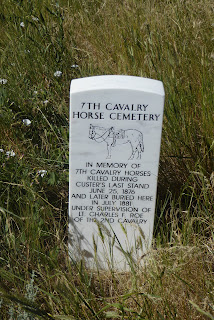 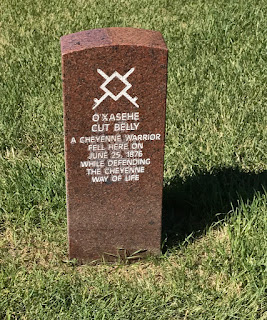 and headstones identifying where Custer's soldiers and the Indians were thought to have fallen and even one for the horse cemetery. They are guesstimates at best for the men - all bodies were removed after the battle - but nonetheless give visitors an idea of the action.

A short distance from the hill is a circular earthwork, the monument to the Plains tribes. The "spirit door" welcomes the departed soldiers inside.

Walls of the sacred circle display the names and words of those who fought and surround a sculpture of "spirit warriors."

There is signage from the Visitors Center to Last Stand Hill and beyond to tell what happened where.

Not that historians on either side agree beyond the fact that Tatanka-iyotanka "Sitting Bull," Crazy Horse and their warriors won the battle but lost the war. As word of the massacre spread, public opinion insisted the Indians must go. Within a few years they were all on a reservation and the Crows, who already had made peace with the U.S., were given the land surrounding the battlefield.

It was to Crow land we went next to see Real Bird's annual recreation of the battle, known to the his side as the Battle of Greasy Grass. It's held on Bird property along the Little Bighorn River where Sitting Bull's camp had been. For once the warriors are young Native Americans and the 7th Cavalry are white men who have learned the cavalry ways at the U.S. Cavalry School and have taken the three-day Custer's Last Ride. 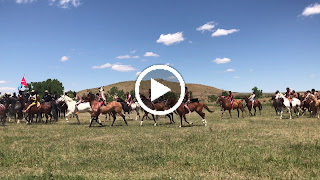 It was hot, just like on "that" day, but we were in bleachers and definitely not dressed in wool uniforms as the soldiers had been. We also had water bottles instead of canteens.

According to the narrator, Custer met his end here, not Last Stand Hill. After weeks of meditating and fasting, Sitting Bull had envisioned Custer at the battle, his death and a great victory. Tribal lore says the Lakota had recognized him from his long blond hair and captured and killed him long before battle's end. Interpreters and historians we spoke with at the battlefield insisted the Indians did not even know Custer was here until it was all over, nor would they have recognized him. The summer had been so hot he had cut off that long blond hair.

Whatever the truth may be, it was an afternoon of young riders in war paint whooping wildly back and forth on their war-painted ponies and bugle-blowing and formation keeping lines of cavalry. Quite colorful. 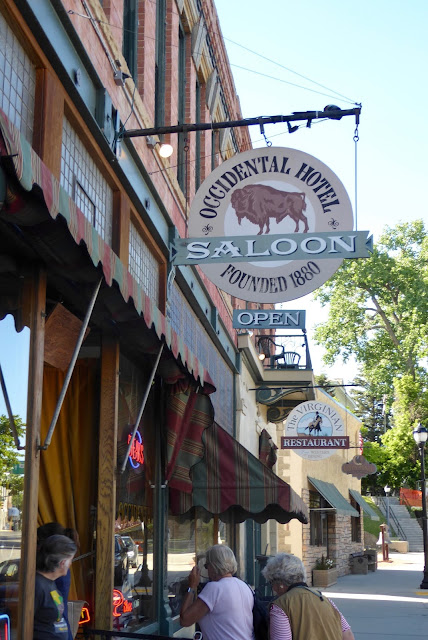 Battle weary ourselves, we headed back to Buffalo, Wyoming, for dinner in The Virginian at the historic Occcidental Hotel. 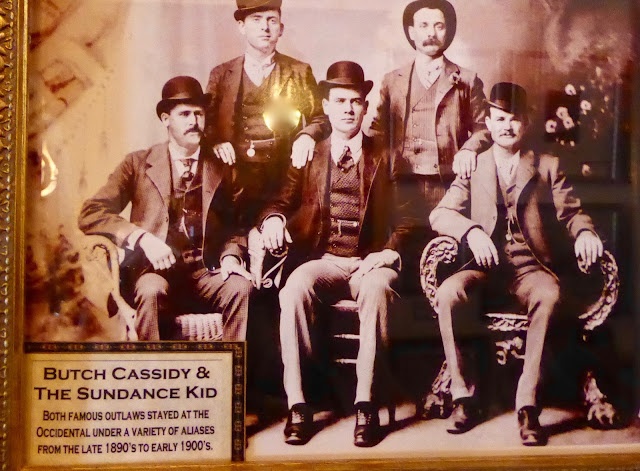 Built in 1880 for the railroad that went to Sheridan instead, the Occidental attracted many of the same visitors as well as Calamity Jane, Butch Cassidy and the Sundance Kid (who may have added to the bullet holes in the entryway and Saloon ceilings) and a host of hard-drinking sheriffs. The 18 rooms are named after some of them and the place reeks with wild west memories. 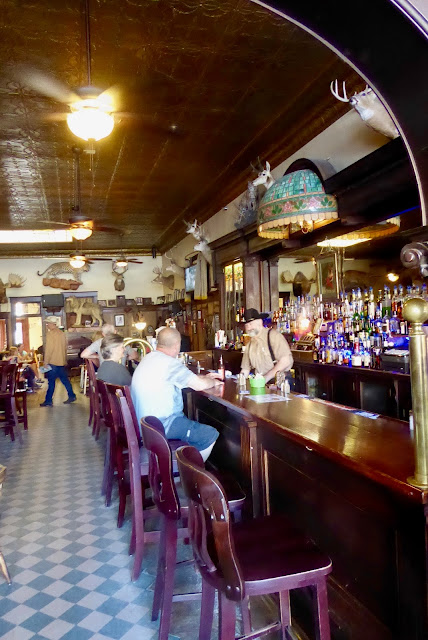 Someday we'd like to sip a few in that Saloon, lean back and listen to the stories of shootouts and high stakes poker games, during one of which ranchers, a father and son, won the hotel itself! Current owner David Stewart looked like he could tell a few.

Fans of author Craig Johnson's Walt Longmire Mysteries series and the TV show based on them may recognize Buffalo as Durant in Absaroka County. There's even a Longmire election headquarters a few shops down from the hotel. Johnson follows Owen Wister whose The Virginian is largely based on tales and actions he witnessed during many stays at the Occidental.


History and literature - a potent combination.