Rugged men, resourceful women, wild ponies running free and oysters worth slurping occupy the Eastern Shore year 'round. Off-islanders visit when the water warms and the weather is better along this 70-mile-long pointy finger of a peninsula from Kiptopeke in the south to the bottom half of Assateague Island to the north.

You know this peninsula with the longest stretch of undeveloped barrier islands on the East Coast (23) has to be worth visiting when you consider the effort and expense of building and maintaining the Chesapeake Bay Bridge-Tunnel connecting it to the mainland. The 17-mile-long creation is considered one of the seven engineering marvels of the world.

One road stretches like a spine from end to end of the peninsula, giving residents a simple way to identify their locale: baysider or seasider, up the road or down the road. Our first stop was The Barrier Island Center in Machipongo, an enjoyable way to learn what life on barrier islands was like.

Westerners have been settling here since the 1600s. Early cash crops were salt and wool. The salt came from the ocean and settlers found a cheap and easy way to control sheep for the wool: maroon them on smaller barrier islands where they could forage for themselves. Today the descendents of those 17th century sheep are adding to the historical accuracy of Colonial Williamsburg and Mount Vernon.

By the 1800s rich northerners were flocking to Hog Island for the hunting and fishing.
A large part of the center's displays are dedicated to the community of watermen on Hog Island that was washed away and deserted following a storm in the 1930s.

From the Hog Island Hotel front desk and the watermen's boats to locally carved wooden decoys and the annual July Fourth baseball games and the recipes for food to fuel them, displays emphasize personal lifestyles. 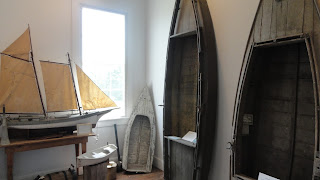 The Center's building comes with its own history having served as the Almshouse Farm since 1803. Machipongo, by the way, is an Indian word meaning place of fine dust and flies. It was windy during our visit which kept the flies down and the thriving grass took care of the fine dust.

If, like Judy, you grew up on Newberry Award-winner Marguerite Henry's books and fell in Love with "Misty of Chincoteague," the Museum of Chincoteague  will be a must stop. The protagonist of that book is stuffed and on display as is Stormy, her third and last foal. So are other mementos of life on Chincoteague, but after the Center you will have seen much of that already. You may leave wishing you had kept going with only Wesley Dennis's illustrations of Misty, but go ahead and stop anyway.


We went to the Chincoteague National Wildlife Refuge to look for the real things, the wild ponies that live on Assateague Island. The popular myth is that they were washed ashore from a capsized Spanish galleon, but genetics indicate they were of domestic stock that were put on the islands to escape a livestock tax and turned feral over the centuries.
After checking with the National Park Service Visitors Center at Little Toms Cove, we found a threesome in the distance while driving along the Wildlife Loop Road, where we also encountered bird watchers sitting in lawn chairs to watch an eagle's nest.
We heard a lot more about the ponies during dinner at Don's Seafood where we met Denise Bowden, the first woman accepted into the Chincoteague Volunteer Fire Company. The company owns and is allowed to graze the 150 ponies on the Virginia end of Assateague. Some 30-40 ponies live on the Maryland end of Assateague, their numbers controlled by artificial birth control.

Since the early 1940s, said Denise, the Chincoteague firemen have auctioned off young ponies as a way to control the size of the herd and to raise money for equipment. The round up, swim from Assateague to Chincoteague, pony penning, auction and carnival are held the last consecutive Tuesday and Wednesday of July. Preliminaries - rounding up the herds, walking them to the assembly area and checking the ponies for health and destiny - fills Saturday through Tuesday. The swim takes place on Wednesday, the auction on Thursday, Friday the ponies swim back to Assateague and, as Denise says, "Saturday we fall out."

It's easy to see how Chincoteague has been voted happiest town, best seaside town and other hospitality and lifestyle kudos over the years. Ducks have the right-of-way, locals are surrounded by sea and bay with all of its bounty, the wild things that live or visit are respected and residents live at a pace that fits with tides and ducks. 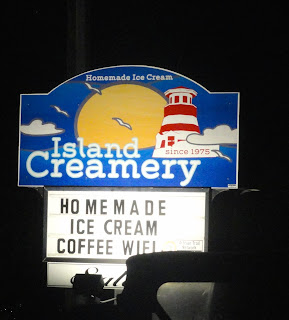 There is room for all, even the human tourists who flock to their beaches, paddle in their waters, come to observe wildlife, clog restaurants and streets of this half-mile-wide, seven-mile-long island.  Even when visitors push ordinary out-the-door lines at the Island Creamery to a length that anywhere else would engender wait-rage, the locals smile.

Marsh mud, an unbelievably dense chocolate, is worth the wait and they know when the winds blow as cold as the locally made ice cream inside, the island will be theirs again.

Colonial or Unexpected, Williamsburg is a Good Fit for the Good Girls


Colonial Williamsburg is a well-polished gem. We started with 300-year-old Bruton Parish Church whose rector, W.A.R. Goodwin, began renovations there and eventually talked  John D. Rockefeller Jr. into funding the recreation of the entire historic town.


In addition to the Capitol and the Governor's Palace, other must-sees:


• The Coffee Shop, where the colonial-style hot chocolate is the best you've ever had.


• The Wigmaker.
• Bassett Hall, where the Rockefellers made their home, their smallest one, in Williamsburg.


Dinner at The King's Arms was a delicious experience enhanced by musicians and the absence of electric lights - candles only.


For an excellent meal in Merchant's Walk, try the Blue Talon Bistro.


By all means, strike up conversations with the "inhabitants " of 18th century Williamsburg. It's fun and you will learn about what life was like then from the people who are living it today.

Of course, we tried on hats. 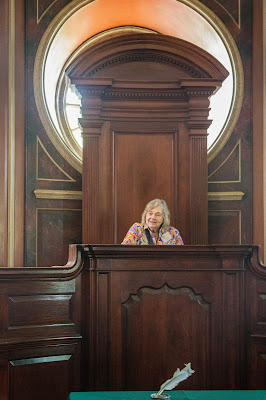 
An unexpected element of Colonial Williamsburg was the museum, actually two in one, the DeWitt Wallace Decorative Arts Museum and the Abby Aldrich Rockefeller Folk Art Museum.

Rain or shine, take the shuttle bus here. You will probably recognize "Baby in Red Chair" and possibly the Dentzel carousel figure of a cat with a goody in its mouth, but the rest, from silver to dollhouses to musical instruments will fill your day with revelations.

Unexpected Williamsburg included a quick tour of Busch Gardens where our fave was the Scottish farm with its Highland cattle, dark Clydesdales, sheepdogs and sheep.

Visitors don't usually think of Jamestown, where the first successful English colony in the New World was established in 1607, as part of Williamsburg, but it is nearby and was a highlight of our trip. Actually, there are two historic Jamestowns. The first location was later abandoned for a safer one.

At the Jamestown Settlement, the latter, you can tour the large museum then see the recreated Indian village, English fort and replicas of the three ships that brought settlers to the New World. All are as authentic as possible.

There are many behind the scenes tours you can  arrange. We highly recommend the inside look at historic costuming.

Don't miss the real thing, Historic  Jamestown, the first actual settlement which until the 1990s was thought to have been covered by the James River. It wasn't and the things they are finding there are remarkable. See archaeologists at work and study the growing mass of artifacts in the fascinating Archaearium.

The Good Girls used to think of mountains, Founding Fathers, plantations, ham lovers when the state of Virginia was mentioned. Now we add watermen, oysters, Chincoteague ponies, the meeting of cultures and archaeology at Jamestown and the enlightened largesse of the Rockefellers in saving and enhancing Williamsburg.

That is the result of a trip that began in Williamsburg, progressed to Portsmouth, Norfolk, Hampton, Jamestown and ended in Chincoteague and Cape Charles on the Eastern Shore.

This wasn't exactly like our previous road trips. We were attending the annual conference of the Eastern Chapter of the Society of American Travel Writers in Portsmouth and had signed up for a pre-trip to Unexpected Williamsburg and a post-trip to the Eastern Shore, but felt the need to see expected-i.e. Colonial - Williamsburg, too. So we arrived there a few days early with honorary Good Girl, Carol Timblin (see 2014's gold mine excursion and Swine, Wine and Dine Tour in Lexington, NC).


Naturally, we had fun and even got a jump on Red-Nose Day, May 21.