Dancing to Drums, Singing to Sweethearts 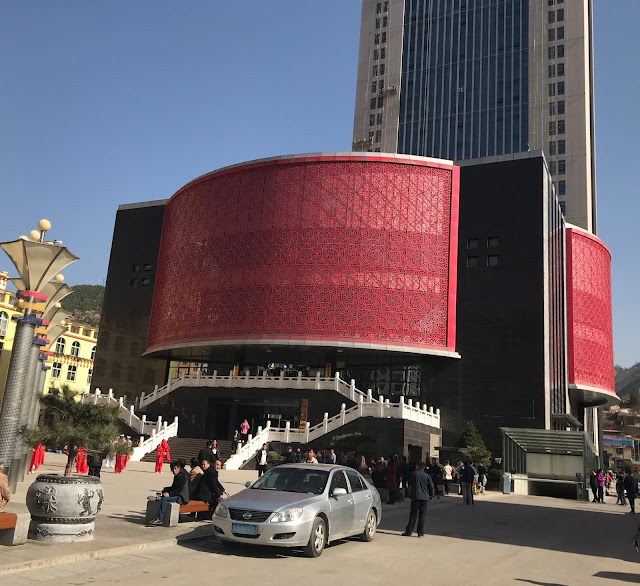 Do not miss the bright and lively Ansai Folk Culture Museum in north Yan'an City. Naturally, the coed Ansai Waist Drum troupe greeted us in the forecourt with a lively performance of leaps, kicks and turns.


You would think we might find these groups rather ho-hum by now but that isn't possible. Each is unique, participants are enthusiastically engaging and the sight and sound is irrepressible. It's a show that injects endorphins into the audience.

The museum's contents were a perfect match. Ansai is known as a center for folk art - the dance we had just seen, paper cutting, embroidery, songs and so-called "farmer paintings". 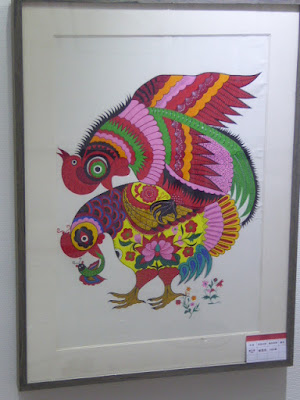 The paintings grab your eyes. In the 1950s. the Communist party encouraged residents of farm communes to try painting. Some did, some didn't, but today's artists, many of them women, produce charming depictions of rural community life. 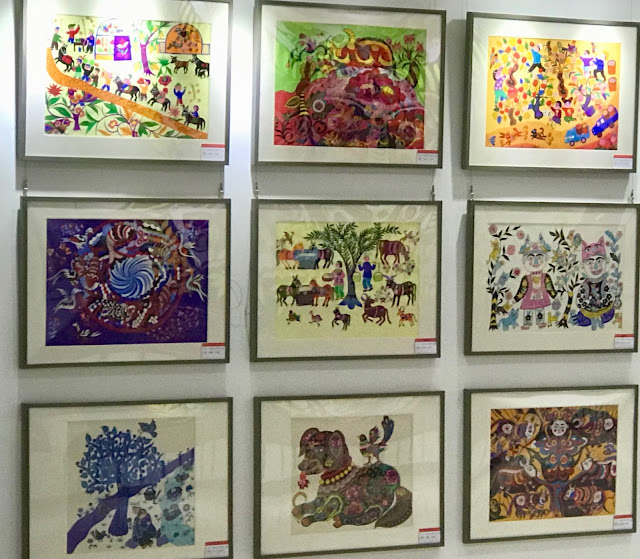 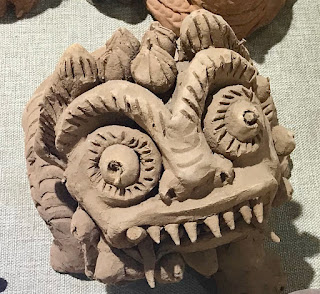 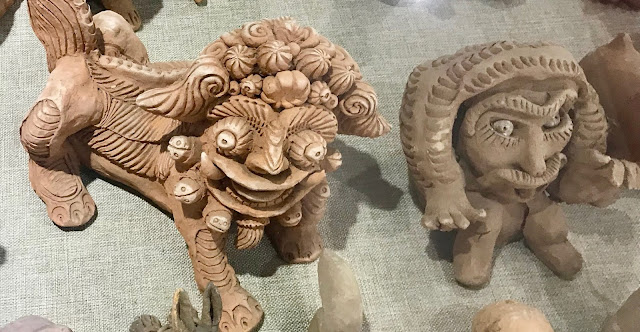 It is hard to tell which came first, these sculpted clay animals and creatures on display or Maurice Sendak's creations. 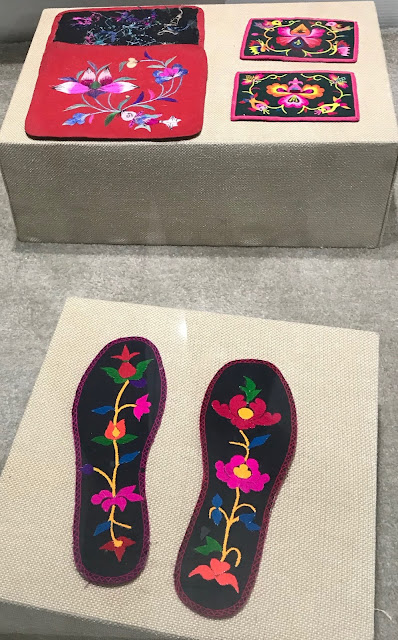 Nothing is too mundane to be embroidered with colorful designs. Shoe insoles, 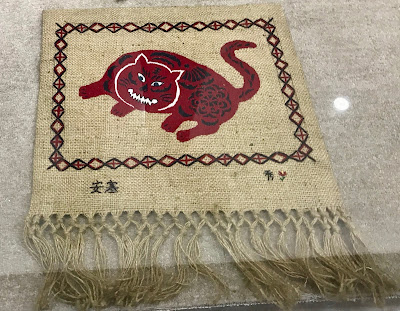 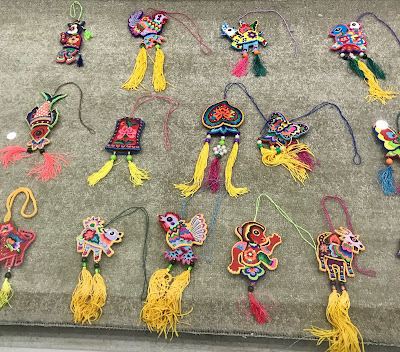 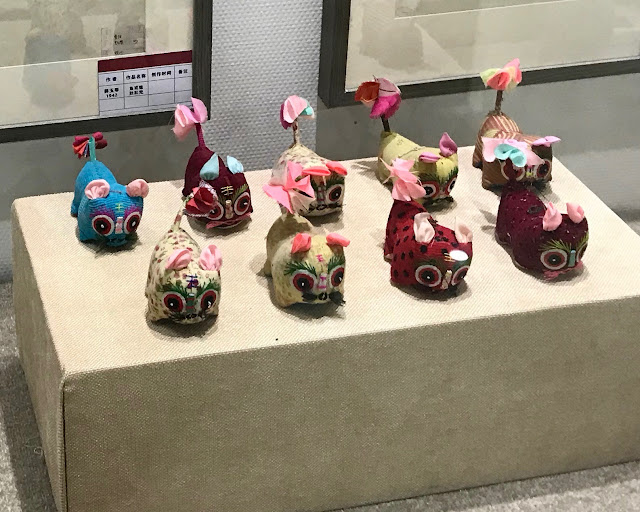 After trying our hands at paper cutting, it is impossible to conceive of the patience and skill required to make any of the mural-sized creations on display. Debi completed hers - I believe it was referred to as "window blossoms" - but I had tried during an earlier visit to China and chose to watch.
Our teacher, reputedly the best in the area, displayed a one-of-a-kind silk scarf done with paper cut art and farmer paintings. 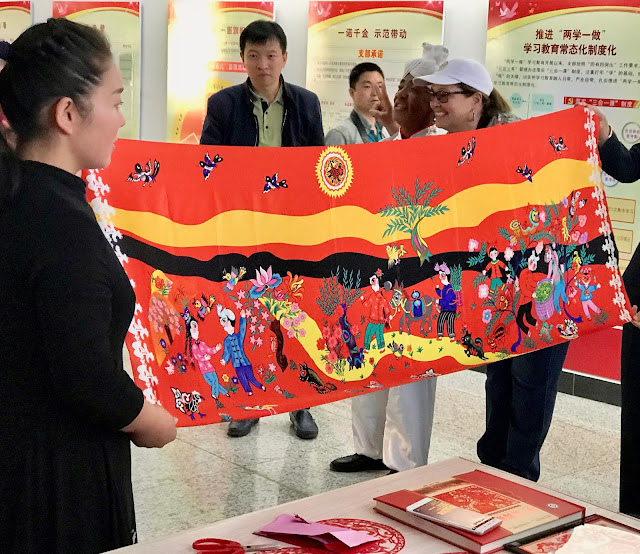 This is an area of hills and valleys and over the years sweethearts developed the art of singing love songs to one another across those distances.

We were treated to an example. 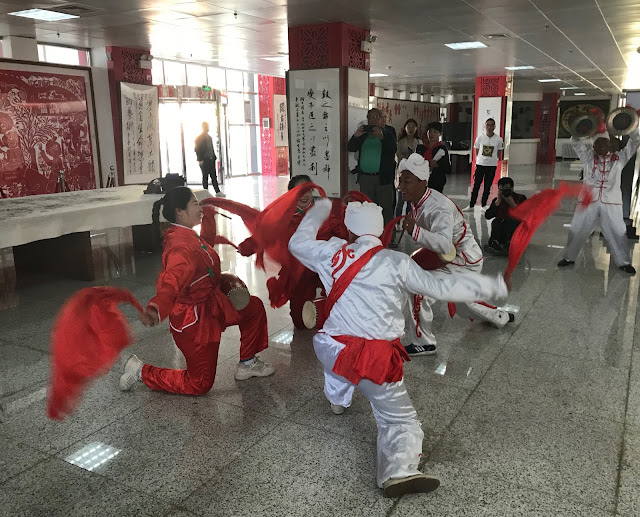 Meanwhile, members of the waist drum group gathered in the museum and began showing our colleagues how it is done.

We wanted to to stay longer but in Shaanxi there is always more to see.