The Good Girls were part of a group hosted by Shaanxi Tourism who were driven by bus to Raojiaying Village, Bowang Town, an off the beaten path village in Chenggu County.

We were to attend a festival honoring the great diplomat, Zhang Qian, who pioneered the Ancient Silk Road 2,100 years ago. Other than that explanation, we had no idea what to expect, something that makes travel in China exciting.


Before writing this post, I did a little research on the Silk Road which I now share. The Silk Road is considered the world’s most iconic network of ancient trade routes connecting Asia, Europe and Africa, both by land and sea.

Its maritime routes extended east to Korea and Japan, south to India, the African coast, Middle East and Southeast Asia.

And yes, the route was named after the silk fiber discovered in 200 B.C. by Empress Hsi Ling Shi while sipping tea under a mulberry tree.

Little did we know we would be watching a formal ceremony of great magnitude including diplomats, high ranking officials who would present offerings amid a cast of hundreds of performers.

No sooner had we arrived than we encountered the official group of ceremonial leaders lined up near a statue of Zhang Qian.

We were also given yellow silk scarves as honored guests.

Zhang Qian was born in Chenggu during the Western Han Dynasty (206 B.C.-24 AD). He was an outstanding envoy and explorer in Chinese history, opening up the ancient Silk Road and bringing reliable information about the Western Regions.

Zhang Qian made two epic journeys to the Western Regions covering many of the countries in Central Asia and the Middle East, including Uzbekistan, Afghanistan and India. Alfalfa, walnuts, pomegranates, and superior breeds of horses were just a few of the goods introduced into China. Meanwhile, Central Asia and Western Asia came to know more about Chinese culture and products, especially silk. Zhang Qian died in 114 B.C.

My group meandered toward the front of Zhang Qian’s tomb, an inner sanctuary that rests above a flight of stairs. We waited and waited for the ceremonies to begin.


But, the temperature began to turn quite warm, and we and many of the dancers and performers started hunting for shaded areas.


While we looked for shade, the officials never moved-- throughout the entire memorial service.


One group of friendly school children engaged us despite the language barrier. They posed and begged to have their photos taken. 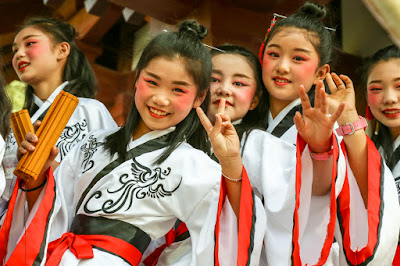 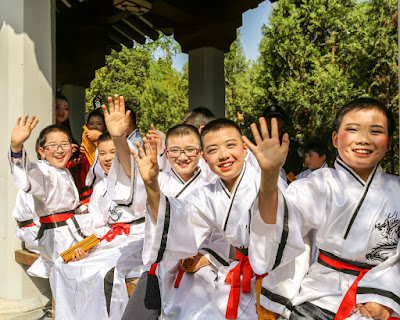 We had to guess what each act in the festival meant, as we couldn’t understand a word.


I presume, in place of real animal sacrifices, ceramic or papier mache figures were presented. They were carried on platters then surrounded by colorful fruit.


Dignitaries presented these and dancers paid homage to the altar, tomb and distinguished guests. Some dancers carried large pitchers, other swords, while others simply danced. The children sang. 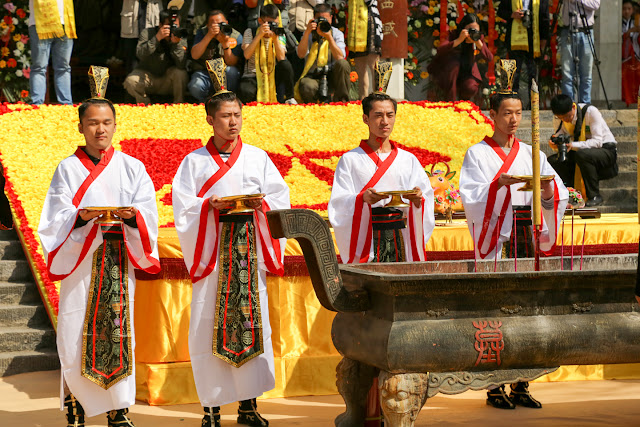 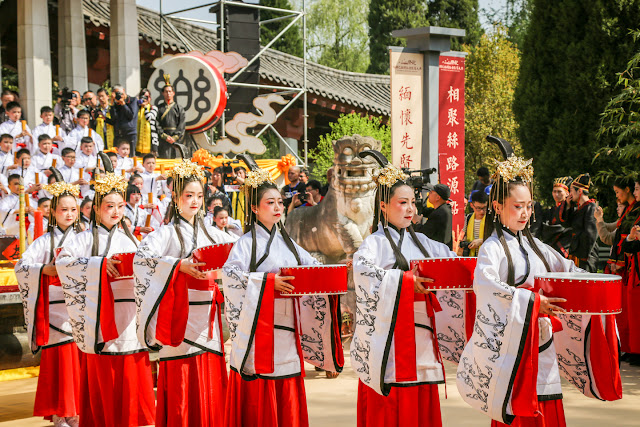 Judy and I watched in awe, juggling to find a place to capture photos. Unfortunately, the Chinese photographers boldly stepped in front of the performers' faces. I must say I found their brashness annoying, but none of them were pushed aside. I guess they were doing their job. 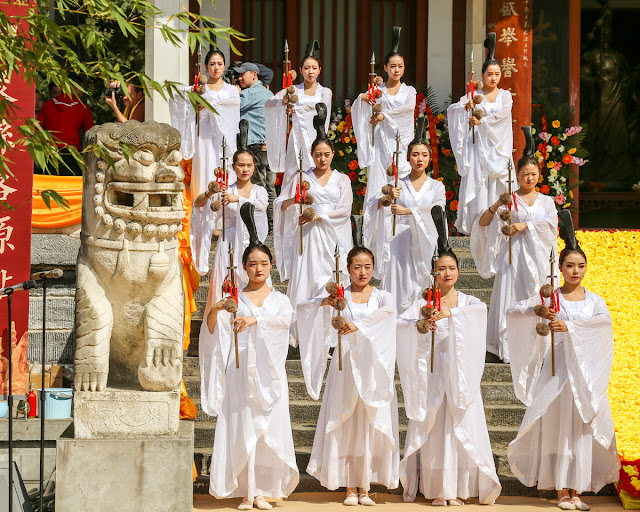 I cannot begin to tell you what the various dances meant, but all the costumes and performers were beautiful, passionate and dedicated to the moment. 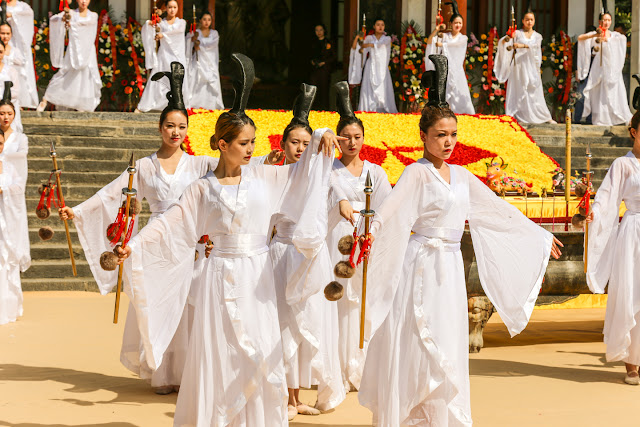 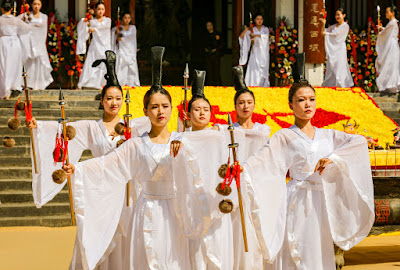 After a few hours of this pomp and ceremony, we grew weary. We will long remember being there on this special day and observing what I believe is an important annual memorial honoring a Chinese hero of great significance. 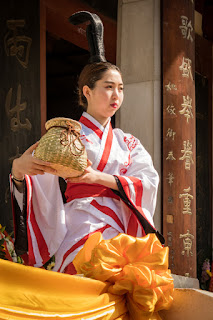 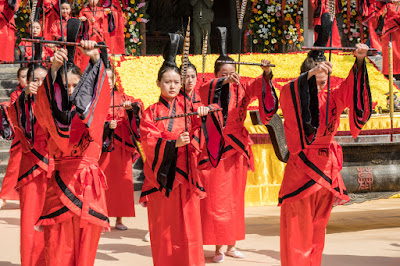 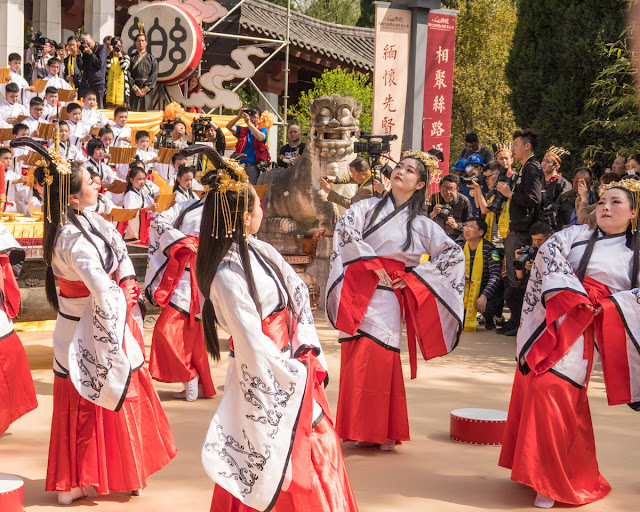 I felt we had been given a rare opportunity to witness an authentic memorial. I am sure many Americans would be eager to see the ceremonies, but at this point, I don’t think the event is open to the public. 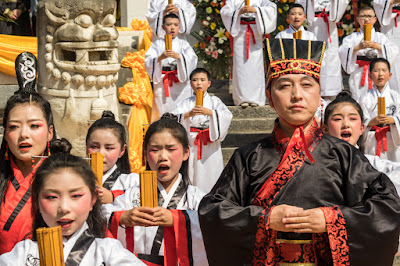 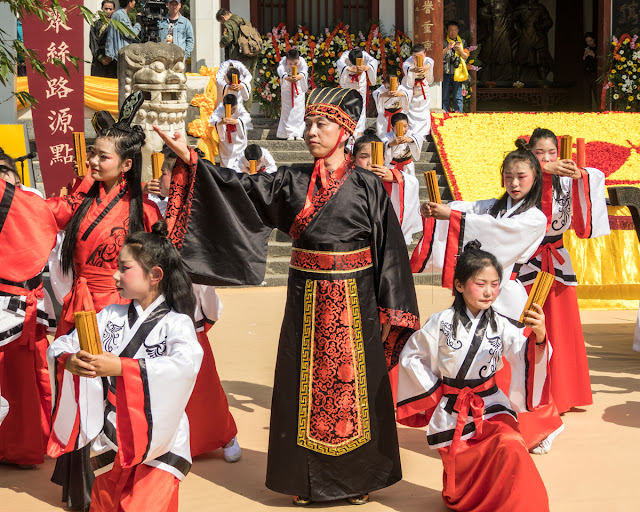 Following lunch in a nearby hotel along with the dignitaries, we took to the streets of town and captured some of the locals going about their daily life. 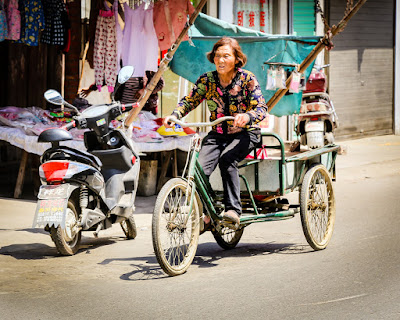 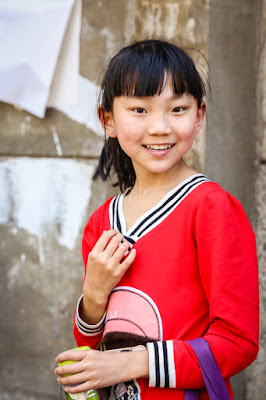 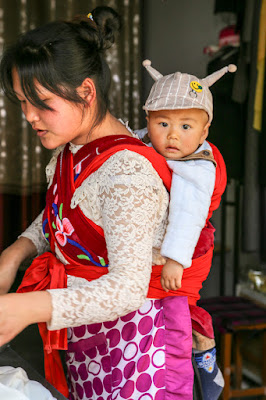 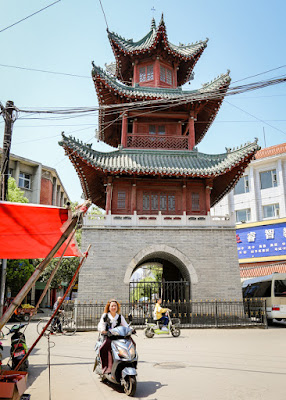 Posted by Bylandersea at 6:19 AM No comments:

Afternoon of Opposites: Giant Genius of Strategy in a Garden and Gems of Art in a Small Museum 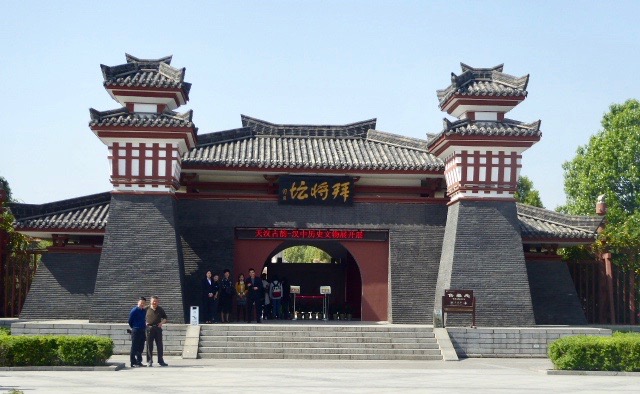 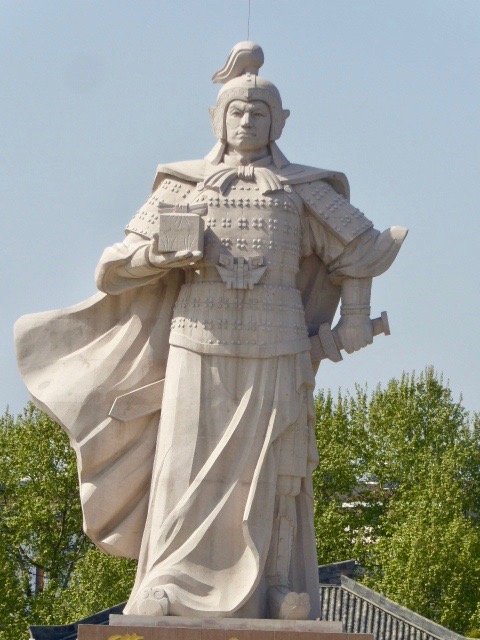 The huge statue impressed us with its sheer size, but we had no real appreciation for the man it portrayed. We admired the setting, hedges of solid, deep pink flowers bisected with paved paths all carefully trimmed, tended and swept by gardeners. I wondered why so much time was spent here. 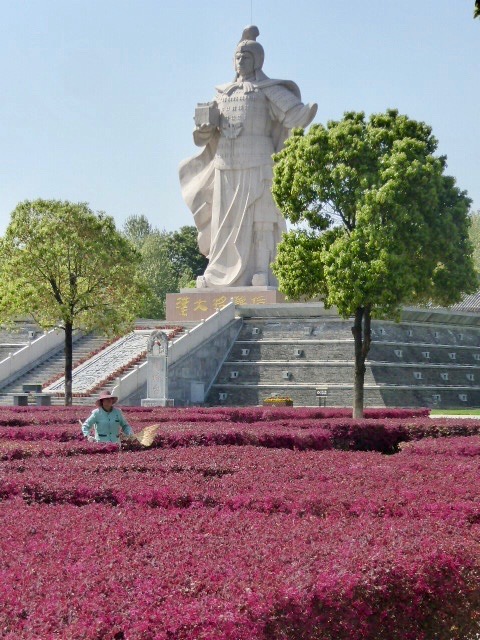 The man, I learned, is Han Xin, whose military strategy and gift for commanding armies made it possible for commoner and minor Qin Dynasty official Liu Bang to become Emperor Gaozu and found the Han Dynasty, 206 B.C.E .- 220 A.D.

Also born a commoner, Han Xin was orphaned as a child and forced to fend for himself, suffering indignities and insults in the process. His interest in martial arts, skill and persistence in pursuing an education in them developed an exceptional, determined individual intensely loyal to any who assisted him.

As the Qin Dynasty crumbled, Liu Bang raised an army to take over, but rulers of other kingdoms and states rose to challenge. Han Xin offered his leadership services to the most powerful contender, Xian Yu of Sun Chu state, but was rebuffed and placed in a lowly position.

Unhappy, he turned to Liu Bang with the same offer, but was given no better position until trusted advisor Xiao He intervened, telling Liu Bang that if he was happy leading the Han state, he didn't need another general, but if he wanted to rule all of China it couldn't be done without Han Xin. His advise was taken, Han Xin was named chief general and the rest is history.

One by one, Yong and Wu Kingdoms, Zhaok, Yan and Qi states fell to his brilliant tactics. Seeing himself surrounded, General Xiang Yu committed suicide and the war of succession was over. Han Xin was appointed King of Chu state and rewarded those who had aided him, including the woman in his village who had shared her food with him who was given more than 200 pounds of gold. Even a former tormentor was offered a job.

Liu Bang became Emperor Gaozu and the Han Dynasty became one of the most successful and long lasting in Chinese history, bringing China and eventually the world paper, porcelain, acupuncture, pulleys and wheelbarrows, a form of seismograph, the Silk Road, more of the Great Wall, salaried bureaucracy based on merit and commpulsive record-keeping.

Unfortunately, General Han Xin did not enjoy his success or that of his Emperor for long. The combination of exceptional ability and loyalty proved his undoing. Whether from jealousy or fear, the Emperor and his wife had their general killed.

I doubt his statue would have been as large had not Han Xin's loyalty been such a vital part of his moral code. When associates wondered why he was so loyal to the emperor, every story about the general features this response:

"My gratitude to the Han King runs extremely deep. He let me ride in his chariot, let me wear his clothes, and gave me some of his food to eat. I've heard it said that if you ride in another's chariot, you must share responsibility for the misfortunes they encounter, if you wear another's clothes, you must resolve their worries, and if you eat another man's food, you must be loyal to him unto death.

How could I abandon morality and justice for the sake of self-interest?"


And when the emperor challenged his general asking, "How many troops do you think I am capable of leading?"

"And what about you?"

"The more troops, the better I handle them," said Han Xin.

"If you are so capable, then why are you one of my subjects?"

"Your position is mandated by Heaven. It is not something humans can change."

Evidently the emperor feared it was. I, on the other hand, wasn't sure the statue of Han Xin was large enough.

There was yet another surprise in store. 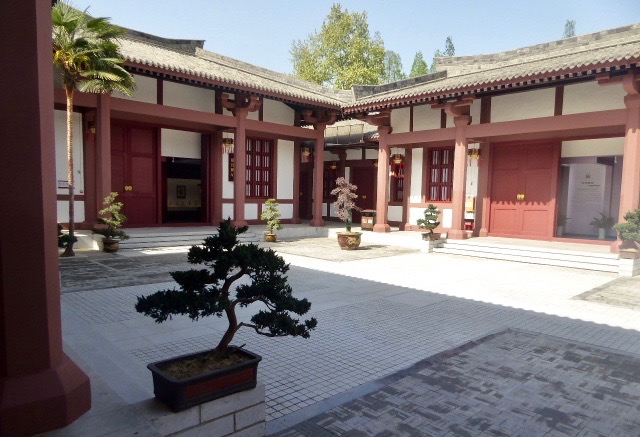 Hanzhoun  Cultural Historical Relics Exhibition
An engaging and enthusiastic director introduced us to this gem of an exhibit concentrating on artifacts from 2-million-year-old fossils to Han Dynasty bronze and clay works. 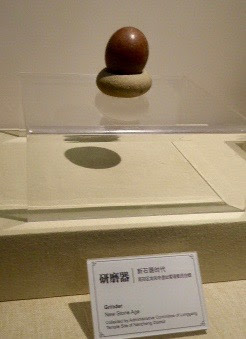 Women rubbed it on their cheeks as a rouge. It also repels mosquitoes and is a sun screen. 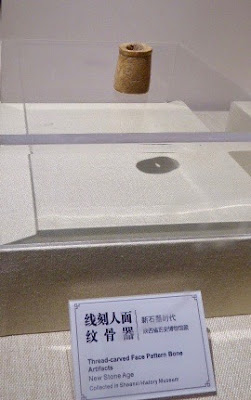 During the Han Dynasty animals were depicted more realistically.

Sometimes the best part of a trip is finding out more about what you saw.

Posted by Judy Wells at 6:32 AM No comments: