You can't go to Mammoth Lakes without visiting Mammoth Mountain and we didn't.
The day was even hazier, but we hoped for the best when we traveled out to the ski center.

One sight we didn't expect was the San Andreas fault, more correctly, fissure, running under the road. It is an awesome and unsettling sight, but no one warned us about getting out and taking pictures so we did.

We later learned that the Mammoth Lakes area has an average of 17 earthquakes a day, but they aren't felt until hitting 2.7 on the scale and most are under that. Six hundred years ago the indigenous people stored food in the fissures to keep it safe from animals. 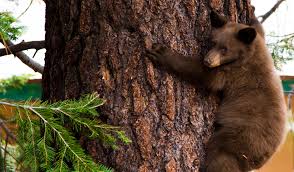 Speaking of animals, about 35 bears live around the town, often holing up in drainage pipes and underneath homes. According to Dave Searles, the local "bear whisperer," they are black bears that are primarily herbivores with a sense of smell so acute they can tell what you've bee eating. You don't have to worry about the more dangerous grizzlies; they've been hunted out. The saying goes that the last grizzly in California is on the state seal. 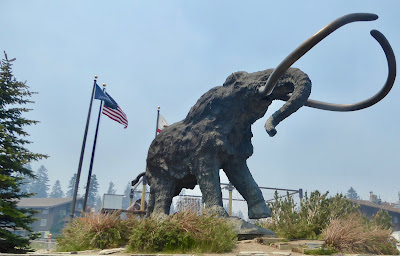 The ski center is impressive. All credit is given to Dave McCoy, who stubbornly persevered to bring skiing to the area. 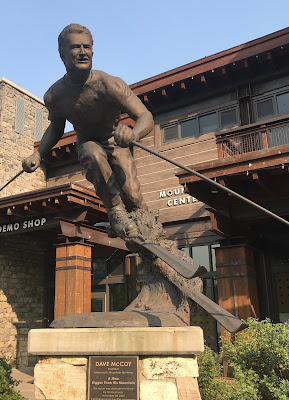 Starting by gathering friends and using heavy-duty trucks to pull the ropes that pulled skiers up the hills to installing the region's first permanent rope tow in 1938. Now one of the biggest mountain resorts in the country, Mammoth boasts an 11,053-foot summit, 28 chair lifts and 3,500 acres of skiable terrain. Hikers and mountain bikers take over in summer. 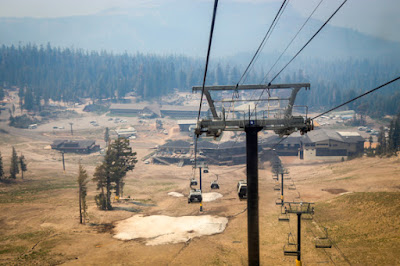 We took the gondola to the top, but there wasn't much to be seen ... 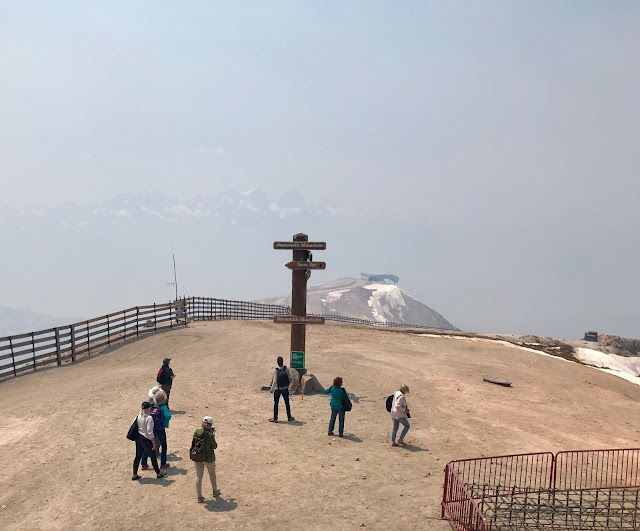 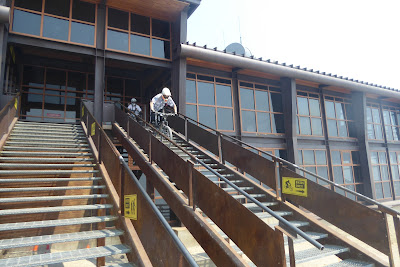 ... unless you count mountain bikers riding their cycles down the steps toward the trails.

That left us with some extra time on our hands and boy, did we fill it... and ourselves. 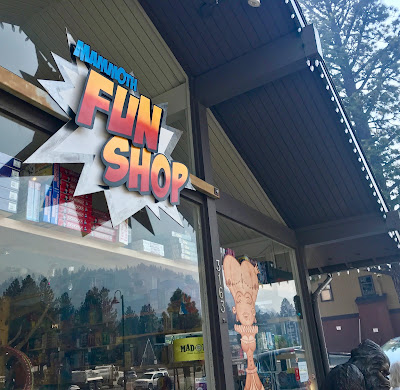 We stopped in at Mammoth Fun Shop and were immediately transported back to the best part of childhood: games, toys, wonder, make believe and ice cream. In other words, fun.  Whoopie cushions, juggling equipment, magic wands, puzzles, illusions, puppets, game sets, look-a-like bugs, snakes, poop. You name it, they have it. 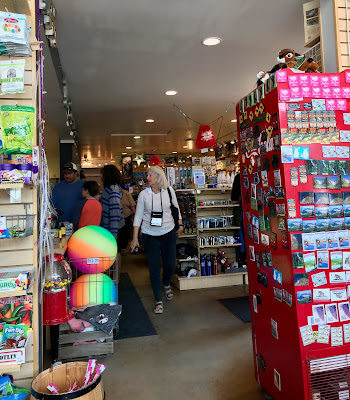 We wandered, exclaiming "Oh, remember this!" or "Look at this!" at every other step. 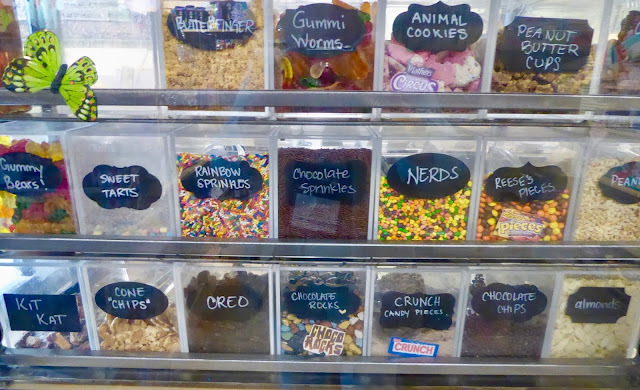 It was "Wow!" when we hit the ice cream counter where a good three feet was filled with every kind of sprinkle under the sun. Buy a scoop or two and take your choice.

Camilla Miller, owner creator with her husband Brant, said she was tired of hearing disappointed children who wanted more than one kind, so she instituted the as many as you want policy. 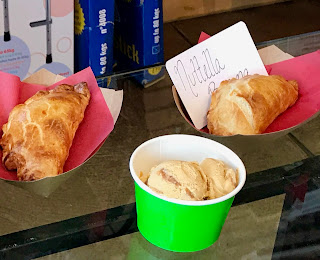 Adults will go for the individual pies and innovative ice cream combinations, if not the array of sprinkles. 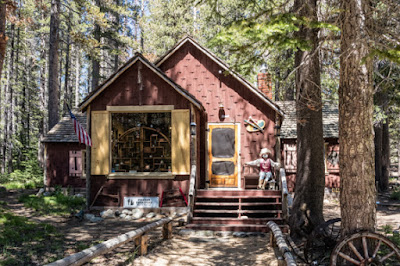 Another worthwhile time filler is The Gallery at Twin Lakes, once summer home and studio built in 1934 by famed Western photographer Stephen H. Willard. Considered one of the four great Western photographers - Ansel Adams, Edward Weston and Wayne Ballock are the others - Willard combined fine photography with painting to capture what he called "the land of purple shadows." His photos were influential in creation of national parks and monuments such as  Joshua Tree and Death Valley. 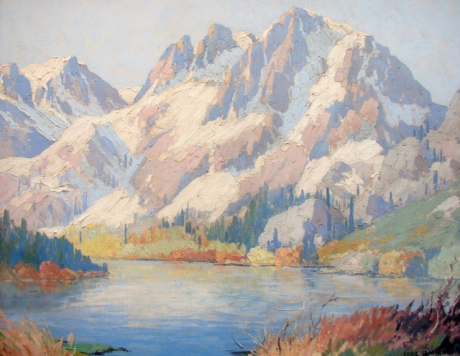 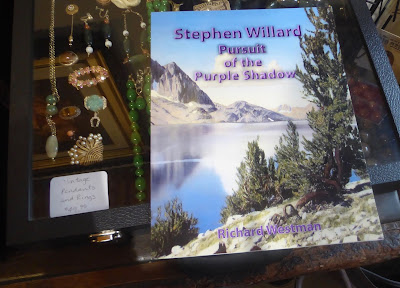 Willard's cabin is now owned by Sue and Robert Jokis, who welcome visitors and
maintain much it as it was as a piece of living history. 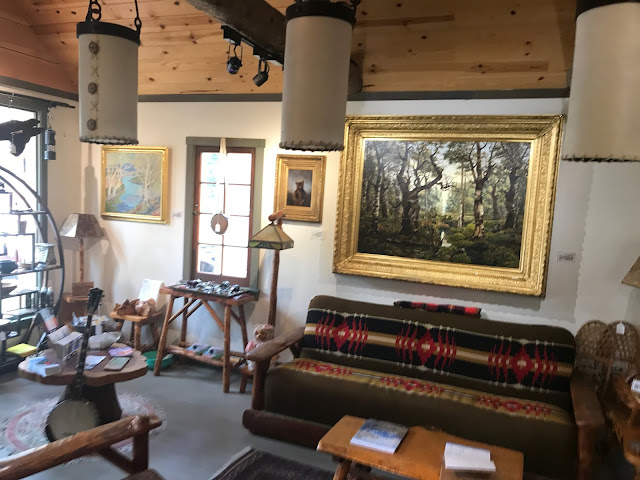 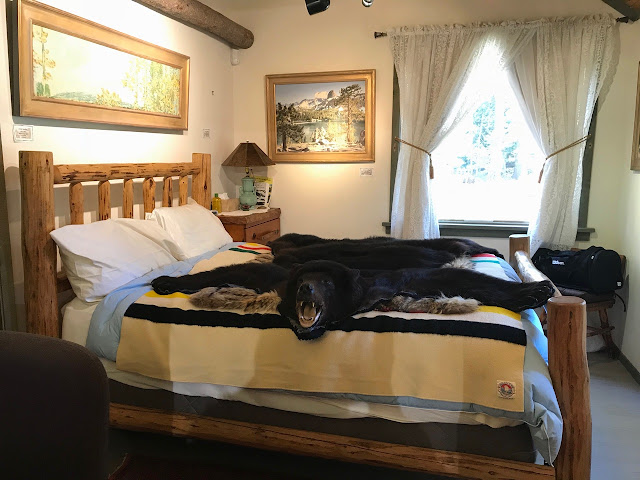 It is a gallery, so if you want a unique souvenir, buy a work of art,  perhaps even one of Willard's.
Posted by Judy Wells at 8:33 AM No comments:

We arrived in Mammoth Lakes at the beginning of California's summer forest fire season, with blazes to the south and west. The nearest, the then 3,000-acre Lions fire, was seven miles to the south. The good news: we would be in no danger in Mammoth. The bad news, the smoke-filled air would continue, getting worse as the wind blew in more smoke from the uncontrolled blazes.

Not fun for us flat-land Floridians, struggling to acclimate to the town's 7,881-foot elevation. The beauty surrounding us in this ski town was both attraction and impetus to keep going.

Mammoth Lakes area of the Eastern Sierras has seen miners, loggers and now is a year-round destination for skiers and boarders, mountain bikers, boaters, hikers, horseback riders and campers, anglers and anyone with an appreciation of Nature's beauty. Like many ski towns it is hard to identify a center as tendrils of hotels, inns, hostels, restaurants, shops, services and private homes wind from main roads through often steep and narrow terrain. 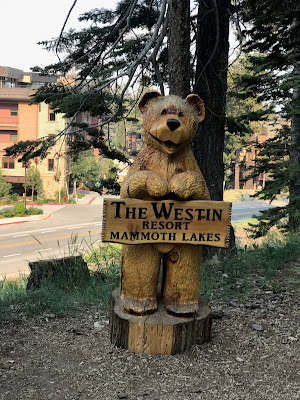 Our hotel, The Westin Resort, was on a short twig of a driveway. As one would expect at a ski resort, rooms came with fireplaces and pegs for heavy winter jackets.


A 40-minute helicopter ride gave an insight into the geology, village, landscape and lakes of the Mammoth Lakes area plus the Lion fire. 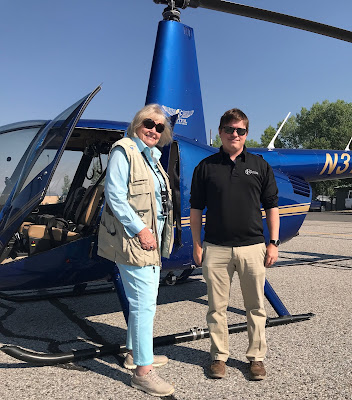 Pilot Brendan apologized that he could not fly south over the ridge - airspace was closed because of the fire - and for the limited visibility.


There was plenty to see to the west, north and east. 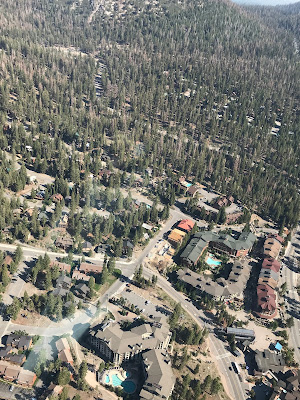 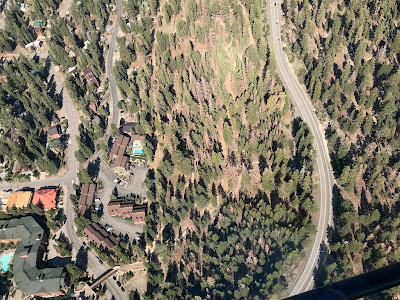 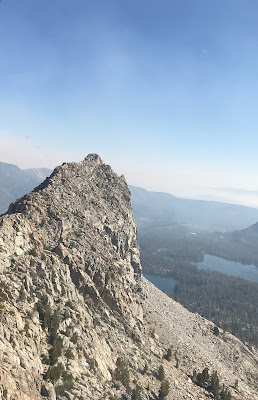 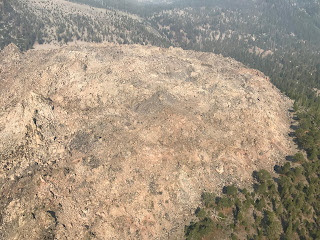 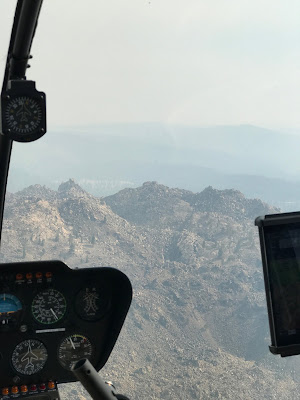 Mono Lake with its tufa, solidified salt pillars like a forest of Lot's wives. 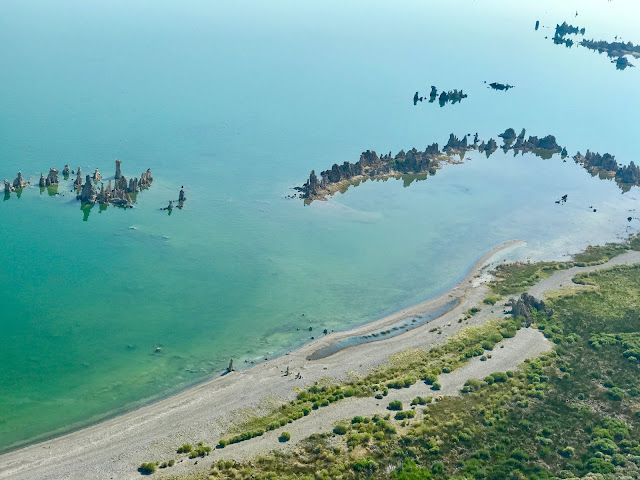 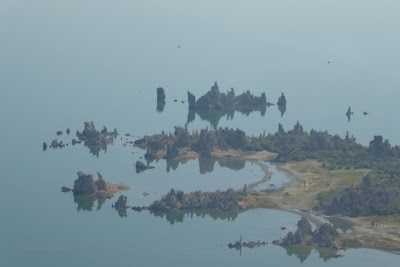 Back on the ground we saw the Sikorsky helicopters being readied for another round of fire fighting. 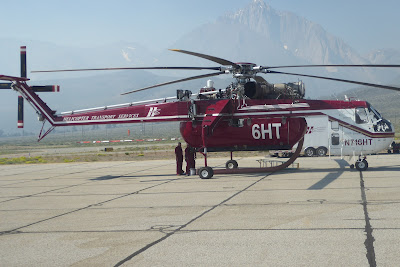 Next up: Mammoth Lakes from the ground.
Posted by Judy Wells at 8:11 AM No comments: