We arrived at Digby Pine Resort and Spa in the late afternoon, a place oozing with character. The golf course and gorgeous gardens surround the main lodge, a 1929 Norman-style chateau. This building offers 85 guestrooms including six luxury suites and common areas. Those wishing a more private setting, choose among 31 one, two and three-bedroom Maritime-style cottages. Each cottage has a homey living room, with a cozy fireplace and spacious veranda. Complimentary wireless Internet is available throughout the property.

The lobby takes one back in time though everything has been refitted. I enjoyed the slideshow on the computer showing the Digby Resort back in the 1930's-50's. The veranda is a gracious spot for an afternoon drink, and we found the main bar and restaurant, plus the gift shop downstairs.

My room on the third floor offered a King-sized bed and magnificent panoramas of the pool and Annapolis Basin. While the room itself was not oversized, I felt comfortable there. I could see the tiny town of Digby across the Bay of Fundy. That evening we dined on famous Digby scallops, known amongst scallop lovers for their tender, sweet, succulent and bigger size. Digby is the Scallop Capital of the World.

The Pines first opened in 1905 as a large wooden hotel. During World War I, army officers used the facilities.  After the war, its new owners, the Canadian Pacific Railway, replaced the original wooden hotel with the present building that opened on June 24, 1929. The Government of Nova Scotia purchased the hotel in 1965. In 2001, management by New Castle Hotels and  Resorts took over. In 2005, the hotel officially became the “Digby Pines Golf Resort and Spa” in recognition of the past and celebration of the future.

The Town of Digby and Bay of Fundy

After stepping into the town's Visitor Center, we met Greg Turner of Gael Tours, who led us on a walking tour to discover Digby's Stones, Steeples, Ships & Seafood. Digby was named after Admiral Sir Robert Digby, who organized the original community in the 1760's. The town became incorporated in 1890. Hence, it is celebrating its 125th anniversary.

The streets of Digby are live with maritime history and flavor. We investigated the Admiral's Walk and Boardwalk, Fisherman's Wharf and the fishing fleet.  Unfortunately, many of the lobster and scallop boats were out working, and we were too early to see their return.  What a shame because I think that event would have been one of the trip's highlights. We did see the much needed steep stairways on floating docks that rise and fall with the incredible tidal changes.

We continued and climbed the hill to see historic homes along Queen Street and the Trinity Anglican Church, a National Historic site and cemetery before eventually returning to the Visitor Center. We learned that little Digby hosts the largest multi-day motorcycle rally in Canada,  the Wharf Rat Rally, on Labor Day weekend.  Imagine tens of thousands of bikes and bikers. (We're glad we missed that one.)

Greg explained the tides on the Bay of Fundy, a famous natural wonder for its miraculous shift of water, the highest in the world. Twice a day, 115 billion tons of water move in and out causing a rise and fall of 20, 30, often 40 feet. During a full moon and high winds, Bay of Fundy tides rise as high as fifty-three feet. In Digby, it ranges from 27 to 32 feet. (Next trip, I want to try Tidal Bore rafting.) 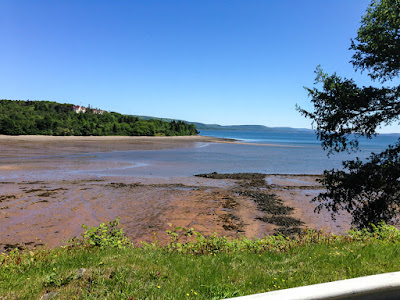 On our drive back to the resort, we witnessed low tide.  Whoa- what a change.  For anyone who ever read the children's classic book, The Five Chinese Brothers, I swear it looked my recollections of the  brother who drank up the sea.  Within our two-hour tour, a tidal pool of tremendous proportion was created.

We returned in time for lunch at the 19th Hotel at Digby Pines Golf Course. From this vantage point,  the course looked beautiful and not too crowded. What did we pick to eat? Why, seafood chowder, and a lobster roll, of course!

Afterward, the Aveda salon at the resort pleasured us with spa treatments. I indulged in a facial that left me feeling moisturized and relaxed. 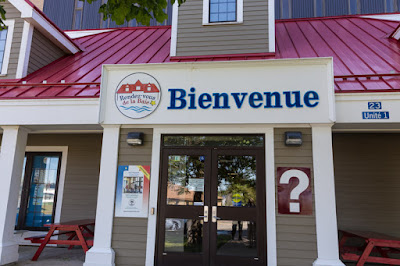 Digby is surrounded by interesting little villages, scenic coves and inlets and other surprises. One side trip took us to Rendezvous-vous de la Baie Acadian Interpretive Center in Church Point where Denis and his daughter Isabelle Comeau were waiting for us.

Surprise, surprise, they were distant cousins of a friend of Judy's. No surprise, every Comeau in North America is related because they are descended from the one Comeau who came here.

We sampled a classic dish, rapure or rappie (pronounced "roppie"), grated potatoes and meat stock, tasted dried fish, then learned about the French colonists who stayed in Canada rather than be deported to Louisiana.

Back to Annapolis Royal for Dinner and a Ghost Tour

Not too much relaxation allowed, we are working girls, so headed back to Annapolis Royal for dinner at Cafe Compose. The restaurant became a surprising delight. My fish was tender and light; the sauce divine. The Viennese owners serve delicious seafood and an audacious apple strudel a la mode. I squeezed in one bite of Sacher torte that was passed around the table, but found it a bit dry. The restaurant offers scenic views of the Bay; however, some tables sit directly in the sun as it sets.

The evening ended with a Candlelight Ghost Tour at what is now the Fort Anne Historic Site. Originally started in 1629 as Port Royal, the area fell to the British in 1710 and was renamed Fort Anne. Heritage interpreter Alan Melanson  leads a tour in Garrison Cemetery, formerly used by the French military, Acadians, the British military and the parish of St. Luke’s. The headstones that  survive represent only a portion of the total number of people buried in this graveyard.

Melanson begins by talking about the traditions surrounding his outfit. He wears a ribbon on his hat called a “Weeper,” given to members of the funeral procession as a gift from the host.

Most participants pick up a candle-powered lantern to carry, and as the light fades, the tour sets off,  bobbing and weaving through the darkness. The lanterns create a pleasing atmosphere but one that attracts mosquitoes and not one especially adequate for photography. Soon we were being eaten alive and called it a night. Sadly, Melanson is a good storyteller, and this ghost tour is far better than most. However, douse yourself with bug spray if you want to enjoy the tour of one of Canada’s oldest English graveyards.

Overall, we dug Digby Pines Resort and the tidal change in the Bay and Fundy is something we will never forget. Annapolis Royal also gets our recommendation for a day trip.

Posted by Bylandersea at 7:43 AM No comments: