Still Galloping along the Eastern Shore

Having eaten enough Chincoteague oysters to start a farm we thought it time to go see one. Tommy Clark, owner of Don's Seafood restaurant, invited us to his, Tom's Cove Aquafarm, where clams and oysters thrive and every month has an "r".

As we arrived they were bagging an order of clams for the Grand Central Oyster Bar in New York City and an ingenious machine was spitting out the bivalves according to size. This sorting machine replaced 25 people, a boon to an otherwise labor intensive business in an area that produces 90 % of the clams on the East coast.

Within an hour, a truck load was on its way so that diners could enjoy them tonight and tomorrow. 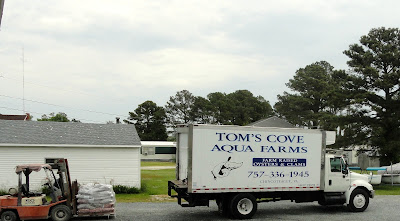 We got to see the lab because the hatchery was inactive. So delicate is this process that if one person wearing perfume enters it can wipe out a whole batch.


Oysters are bred here in the lab where microscopically small oyster larva is introduced to sand grain-sized oyster shell in aerated water. The larva attaches itself to the shell and begins life in a tank of water. Later, the youngsters will be taken to deep water to live, grow and be harvested in two years for small oysters, four to five years for large ones. Leave them alone and they can live for up to 23 years.

Hmm, do old oysters get tough? Didn't think to ask.

Because of their track record for safe growing and harvesting, Tom's has permission to keep a one-week supply on hand in case of bad weather.
The "baskets," kept in waters off the dock, weigh 80 pounds apiece and are moved to the shore as needed for gathering and shipping.

Our next stop was the once thriving port of Onancock, a pretty little town, where we stopped at the centuries old Hopkins & Bros. Store on Onancock Creek.


After lunch next door it was on to Ker (pronounced "car") Place, headquarters of the Eastern Shore of Virginia Historical Society.

A fine Federal period Georgian style home, it was built between 1799 and 1803 by the rich merchant farmer John Shepherd Ker and his wife, Agnes Corbin Ker. It has been restored to its original appearance from the woodwork to the colors of the painted faux finishes.

During the day, Debi managed to continue the oyster theme by trying on the togs of an oysterman, 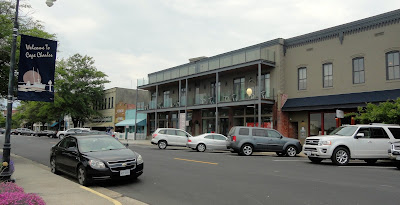 Oh, for a bottle of wine and time to sit on the cozy balcony that comes with each room and watch the inaction on the street, but we pressed on. An amble down the main street was followed by a look at a few of the town's many attractive B & Bs. A brief glance at Cape Charles Beach and it was time to walk over to the bay for dinner at The Shanty.

What a surprise. Masquerading as a typical seafood shack, The Shanty was a huge open space centered by a lively bar. Behind the wall, though, was a kitchen that turned out anything but ordinary fare. From grilled asparagus to soft shelled crab, they pleased our palates.

This was going to be our last chance to enjoy fresh Eastern Shore oysters and we were dismayed when told they were out of our favorite treat. We were almost resigned to ordering fish when our waitress said the chef had taken pity on us and agreed to shuck and fry the singles being saved for half shell orders.

What a treat and we knew it, having learned from Tom that morning that shuckers, the small-sizes used for cooking, sell for $40 a bushel while the big singles go for $100-$140 a bushel.

We left full of appreciation for the soft, salty bivalves and the generous, welcoming inhabitants of Virginia's Eastern Shore.