Aliens, Integratron, an orrery and other sci-fi doings between Pioneertown and 29 Palms CA


Landers, CA, 20 miles north of Joshua Tree National Park, is UFO country.  Nearby Giant Rock, one of the largest free-standing boulders in the world, was the site of "Spacecraft Conventions" for 20 years. 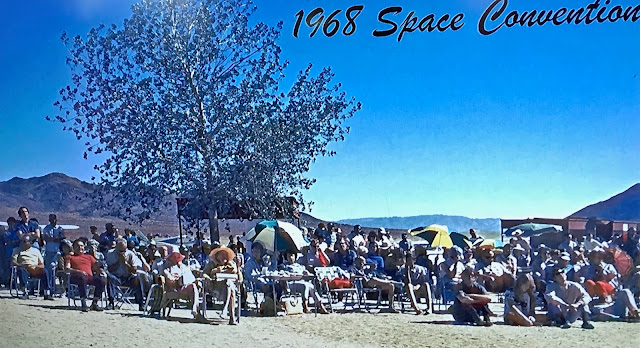 George Van Tassel, an aeronautical engineer for Lockheed Douglas and a test pilot for Howard Hughes, learned of Giant Rock from a prospector, Frank Critzer, who had hollowed out rooms beneath the boulder where he lived and stored supplies.  Critzer, an American of German descent, was suspected of being a spy during World War II. When he refused to cooperate, authorities tossed in tear gas bombs to smoke him out. They caused the dynamite to explode, killing the innocent miner.

In 1947 Van Tassel left his career and moved his wife and three daughters to Giant Rock where he leased four square miles from the Bureau of Land Management, opened Giant Rock Interplanetary Airport and a restaurant that became famous for Eva's hamburgers and spiced apple pie. Unlike the prospector, the Van Tassels lived in tents.

As the story goes, at 2 a.m. in August 1953, he was awakened by the landing of a ship from Venus. A being named Solgonda invited him aboard where he was given the secrets of the Integratron and developed a telepathic relationship with his host and a Venusian Council. He then began to channel information about time travel and rejuvenation.

Afterwards, Van Tassel held weekly meditation and channeling sessions in a 400 square-foot chamber under Giant Rock. The first Interplanetary Spacecraft Convention was held at the rock April 3, 1953. Thousands attended the annual events for 20-plus years. In 1957 Van Tassel broke ground for the Integratron on a powerful geomagnetic vortex in the Mojave Desert. Tassel claimed its design is based on Moses' Tabernacle, the writings of Nicola Tesla and directions from extraterrestrials. Financing came from private sources including large donations from Howard Hughes.

Van Tassel died in 1978, before its completion, but his daughter and others kept the project alive. Today the unique 38-foot high, 55-foot diameter building, listed on the National Register of Historic Places, is owned and run by two sisters who offer regular "Sound Baths."

Naturally, the Good Girls had to give the hour-long "sonic healing" experience a try. No photography is allowed so we are borrowing images from the website. 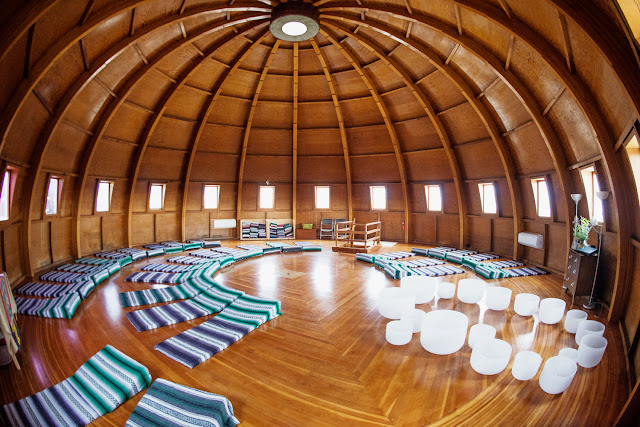 "Bathers" enter the first level, stow shoes and belongings in lockers then climb a steep ladder to the top where each one takes a blanket and stretches out on an individual floor mat (there are few metal folding chairs for those who can't handle the ups and downs).

Quartz crystal bowls of varying sizes are "played," creating resonant sounds that can be quite loud. Judy liked it but sitting in one of the chairs was uncomfortable. Debi found it painfully loud, hated it and emerged with a splitting headache. Others had similarly mixed reviews. 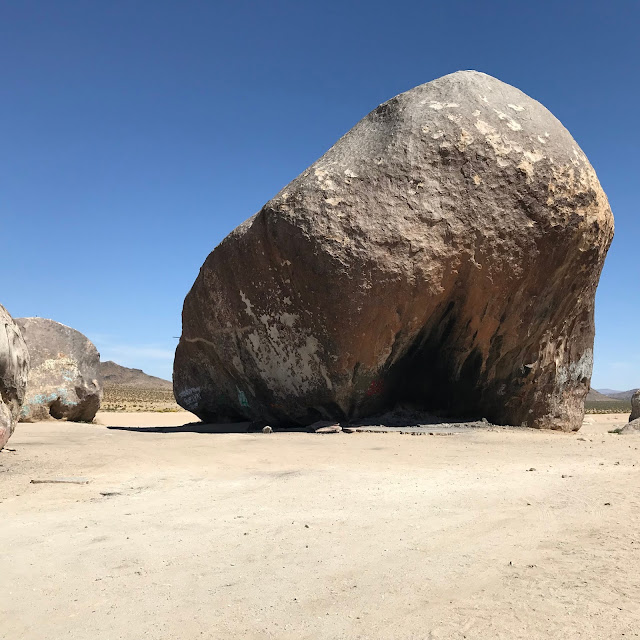 Nonetheless, we pressed on to the Giant Rock some 5 miles north. It is a big one, seven-stories high covering almost 6,000 feet. 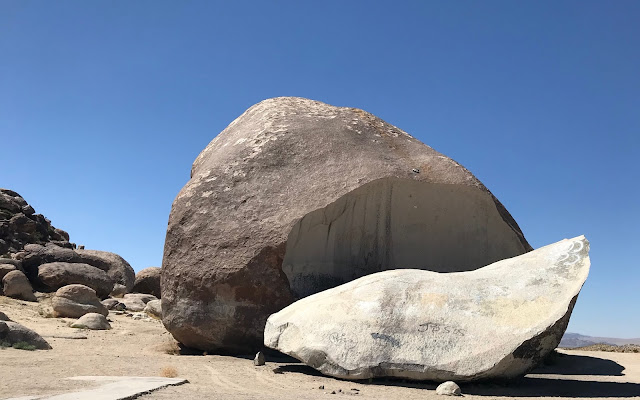 A hunk that cracked off in 2000 may have jeopardized its largest of all status. 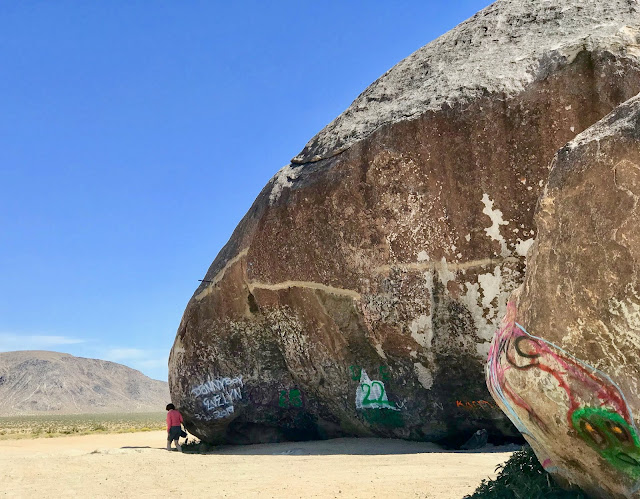 Centuries before Van Tassel or his aliens discovered it, Giant Rock was a spiritual site to Native Americans, especially the Hopi. Sadly, graffiti mars its granite surface. 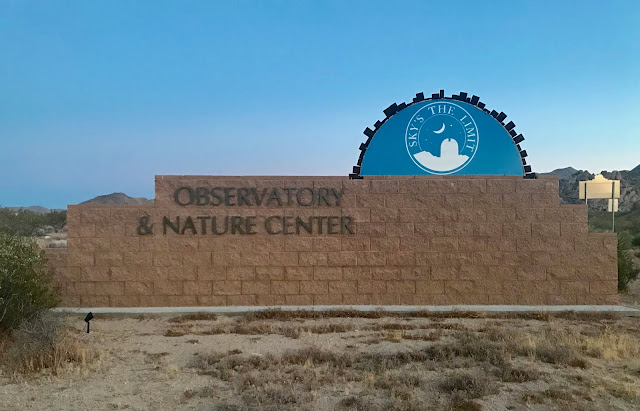 For a true scientific approach to our galaxy and solar system, visit Sky's the Limit, a grassroots, all volunteer-run dark-sky park at the northern border of Joshua Tree National Park in 29 Palms. In its 15 acres are an Observatory Dome with telescope so powerful we could imagine ourselves leaving footprints on the moon and an orrery. 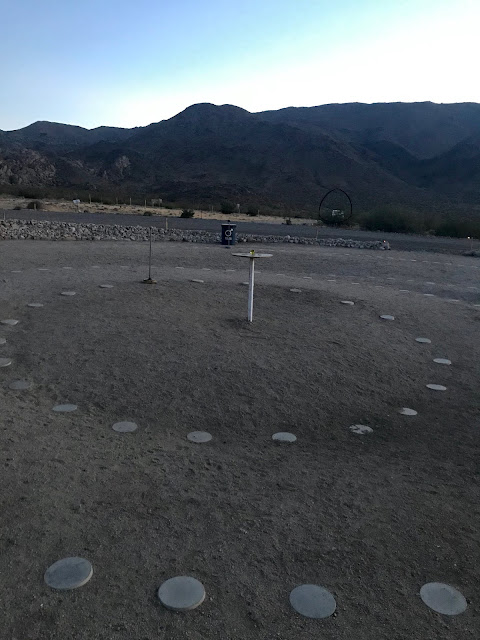 A mechanical device or in this case a walkable one that allows viewers to see the solar system and its movements in perspective. It was too dark for us to truly get a feel for the circular pattern of stepping stones, each of which represents four days travel around a planet's orbit. At a scale of 20 billion to one, the specks or pinpoints representing planets are one-twentieth of a bllion the size of real ones.

It is complicated to explain, but the oldest orrery in existence, Antikythera, goes back to 150-100 BCE. The first one constructed in the modern era was produced in 1704, by English clock makers and was named for Charles, the fourth Earl of Orrery,  who commissioned it, thus the tongue-twister of a moniker. 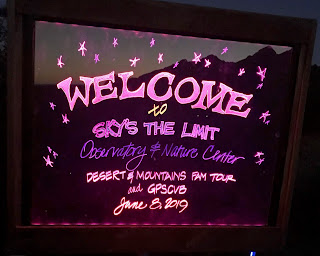 Arriving earlier would have given us time to experience the orrery as well as the meditation garden built on Zen principles, the nature trail of desert plants and the astronomy-themed sculptures of Simi Dabah.

Certainly not your standard art galleries, museum and performance space can be found amid the strip shopping area near Joshua Tree. 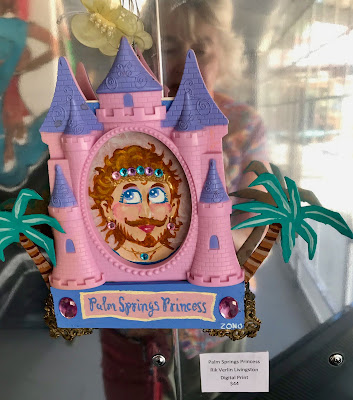 Designed by and for liberal adults the galleries exhibit gay and lesbian themed
work. 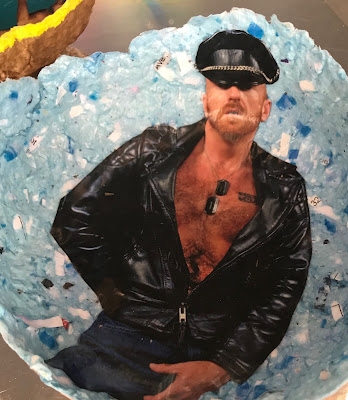 The Crochet Museum fills every inch of a very small trailer. 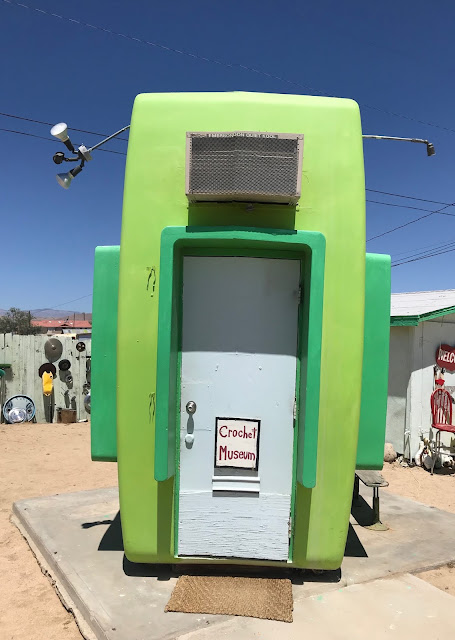 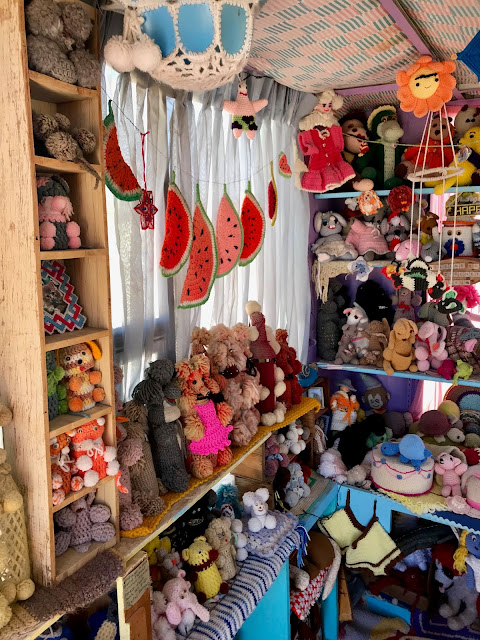 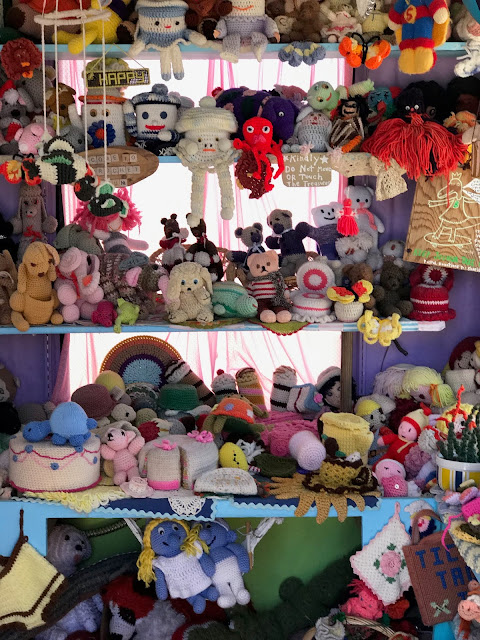 We puzzled over the sculptural sort of Jungle Gym 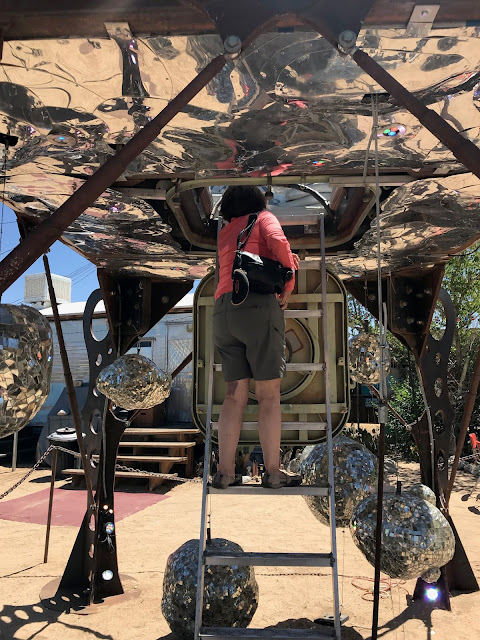 and it was hard to know what to expect at the open air performance space tucked in behind the store fronts. 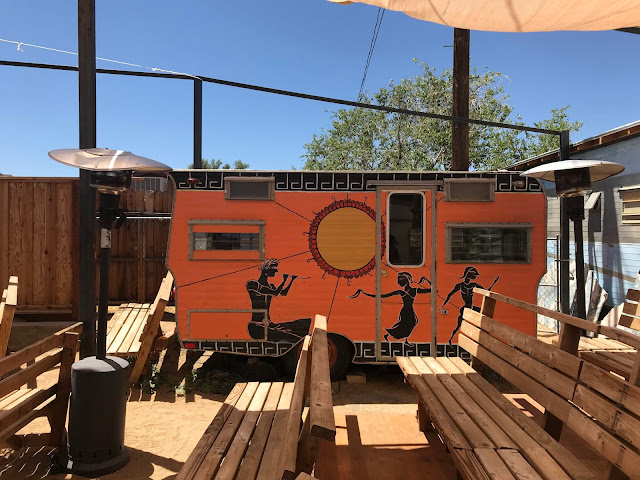 Although we enjoyed much of what we saw, it was frustrating that our hosts in Palm Springs scheduled our excursion into these desert communities so that we missed seeing Gubler Orchids, the Noah Purfoy Desert Art Museum and had no time to receive informed explanations from a park ranger at Joshua Tree or to visit the National Park's Visitor Center, always a fascinating source of information and perspective.If you manage to see them, please let us know what we missed.

If you go:
The Integratron is open Wednesday-Sunday March through May, October through December and Thursday through Sunday February, June and September. Price for the sound bath is $35 per person over 13 years of age, $40 weekends and holidays.

Sky's the Limit campus is always open, but there is no running water and restrooms are locked unless a docent is present. A volunteer docent is usually on campus Saturdays from10 a.m. until 2 p.m. to give tours of the Orrery and set up the Solar Scope. Free public star parties are on Saturday nights when the moon is not full  beginning at about an hour after sunset and lasting about two hours. Check for exact times and dates of these and other special programs. https://www.skysthelimit29.org/calendar.html
Posted by Judy Wells at 8:18 AM