The landscape in Florida, where we, the Good Girls live, hovers just above sea level and stays humid most of the year. On our visit to Palm Springs, the dry, harsh landscape of the Mojave Desert in California felt just about the opposite. We’d never seen a Joshua tree before, the largest species of yucca, and were eager to get into the aptly named National Park. The species are only found in the southwestern United States at altitudes between 1,300 and 5,900 feet elevation.


Upon entering Joshua Tree National Park, we found massive piles of granite boulders and rocks jumbled together. The ground looked dry, a  sparsely covered grassland with twisted and strangely foliated trees. The Joshua trees extend barren limbs, which end with spiky green shoots or leaves. They wear rough, weathered trunks, and are scattered widely apart from one another as opposed to a denser growth of trees in a  deciduous forest.


According to the National Park Service, “The tree’s name is owed to a group of Mormons settlers who crossed the Mojave Desert on their exodus west in the mid-19th century.” Supposedly in silhouette, their extended limbs evoked images of Biblical Joshua with arms outstretched, leading his followers to the Promised Land. Can’t say that I saw that, but the trees were oddly likable and rather cactus-like.

Most folks make a day-trip or spend only half a day in the park driving along the roads and stopping at various formations. There are three entrances,  each with a visitor center, so you can drive through as opposed to making a loop. Joshua Tree National Park has no lodge or restaurants, but camping is permitted. Those interested in rock-climbing, hiking, or biking should bring plenty of water and start early in the day.

We visited in June, one of the hottest months, and our itinerary allotted only a few hours. Our local host did the driving, and we got out to photograph along the way. We did not see Keys Ranch, which I understand is one of the most exciting spots. But we managed to catch views of several different sections of the park and its arid landscape.

My favorite spot in the National Park was the eerie skull rock. Pretty obvious why it’s called that!

Looking up at the teetering rocks and giant boulders, I imagined various figures and shapes. No wonder the park lures many rock climbers.

The overlook area, called Keys View, provided a seemingly endless panorama reaching to the distant city of Palm Springs down in the valley.

During this late spring, the Joshua trees were still in bloom but fading. A large, white cone-shaped cluster of flowers grows at the tip of the leaves.

I am delighted that President Franklin Roosevelt created and preserved the area back in 1936 and that  Joshua Tree National Park was established in 1994. It annually receives about 1.4 million visitors. 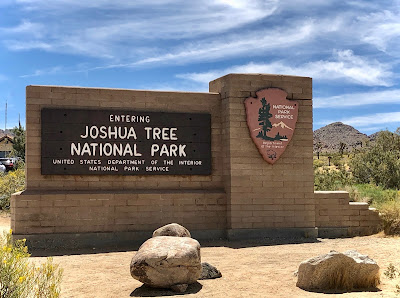 Grand enough, but this was not a park that begs me to revisit over and over. I didn’t feel the vast majesty of the Grand Canyon or the curiosities found in Yellowstone. That’s just my opinion, but I’m pleased I was able to see it once. Should you be in the Palm Springs area, I’d heartily encourage you to go and learn about Joshua trees.

Posted by Bylandersea at 8:52 AM