One Day in Yosemite Is Not Enough

The Good Girls love slow travel, taking time to absorb a place beyond the surface, but travel time is precious, and we can’t always linger. Such was the case with our Mammoth Lakes, California trip. Even though we could allot only one day, we decided to make it a full day-trip and see as much of Yosemite National Park as possible.
A local tour company named PLAYosemite picked us up at the Westin in Mammoth Lakes, and we headed to the park along with another friend and travel writer. Our guide was most knowledgeable and provided much background history and information as we drove along. 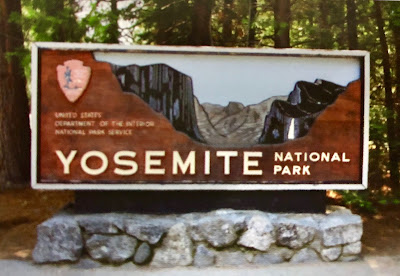 Yosemite National Park ranks as one of our nation’s oldest parks, established in 1864 during President Lincoln’s administration. Lincoln, however, never visited. During those early days, it took a visitor about 4-5 days to reach Yosemite by carriage or horse from San Francisco. Today, the world-famous park draws an international crowd, about 5.2 million visitors each year, including rock climbers, hikers, anglers, campers, birdwatchers and photographers.


En route we passed Mono Lake, brimming with water that’s three times saltier than seawater, and stopped nearby to pick up sandwiches. We entered the park at the Tioga Pass gate, only open in the summer. Having a driver/guide who was very familiar with the area roads really helped us see the highlights: El Capitan, Half Dome, Yosemite Waterfall and the Valley. We wouldn’t get to the Giant Sequoia trees at Mariposa Grove as they were too distant. After all, Yosemite encompasses a total of 1,200 square miles.

We started in the less- crowded High Sierra terrain and would make our way down into the famed valley. First stop became the Tuolumne Meadows where we watched a few people sketching and others rock-climbing on granite crags.


Farther along, we briefly paused at what is called Tunnel View.

Our guide drove through the Wawona Road Tunnel and parked at the overlook, the classic panoramic view of Yosemite Valley. This traditional scene becomes a pinch-me moment. It's one of those spots you’ve seen in pictures all your life, but now you are standing there. Photos don’t do it justice; the grand natural gem stands as one of those places you must see for yourself. 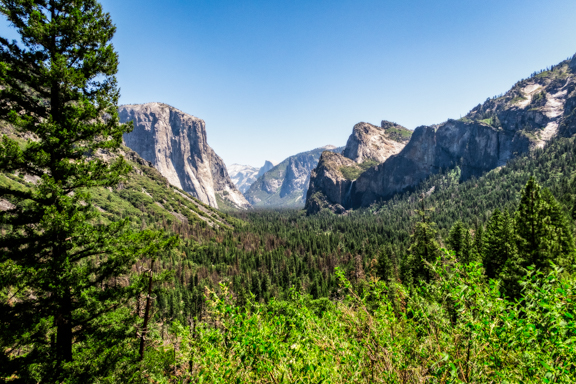 We took our time and gazed in wonderment at the world’s tallest unbroken cliff, El Capitan, that rises about 3,000 feet, and Half Dome that looks like it’s been cut in half. Its face was slashed by glaciers during the Ice Age. From this vantage point, we also noticed the wind blowing across the beautiful Bridal Veil Falls. The Ahwahneechee Native Americans called the waterfall Pohono, which means, “Spirit of the Puffing Wind.”

Then, we piled back into the van and drove down into Yosemite Valley, pausing where the old village once stood and photographing the Yosemite Chapel. We watched some daring rock climbers but were perfectly content view the rock from below.


Our guide knew of a secret spot for a picnic lunch and we enjoyed our sandwiches as if we were the only ones in the forest primeval. Pretty amazing.

We next took off on foot and crossed a bridge on the valley floor, seeing rafters enjoying a ride on the Merced River.


We proceeded to the pathway that leads to the spectacular Upper and Lower Yosemite Falls. The falls drop from 2,425-feet over three cliffs and are the tallest in North America. Peak flow is usually in late May. You must walk to get there but worth the effort.

We wished we had time to tour the historic Ahwahnee Hotel, a National Park Lodge endeared by thousands of past guests for more than 90 years. The hotel briefly lost its name during a change in management, but as of July 15, 2019, it regained it.
At this point in the day, we sadly had to begin to make our way back to Mammoth Lakes. We noticed evidence of past fires and signs that marked highwater peaks in the flood of 1997. Can’t stop Mother Nature.


Spectacular does not come close to describing the grandeur of the park, with its towering summits, cascading waterfalls, and shimmering lakes. Of course, a multiple night stay, including sunrises and sunsets, would be far superior, but if you only have one day, do not hesitate. Go for grandeur. No one is disappointed—ever.

Be sure to check out Yosemite National Park’s website before and during your journey (nps.gov/yose/).
Note from Judy: Between Olmstead Point and Wawona Road Tunnel, our guide pulled off the road to the right and stopped at Fern Spring, a spot you have to know to notice. A sacred spot to Native Americans because it flows even during the driest seasons, the water is clear, pure and delicious. If you are carrying water bottles or canteens this is a good place to refill them. 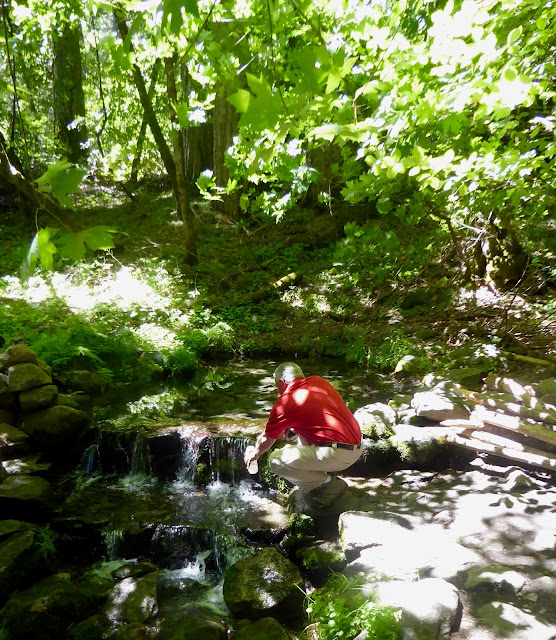 Posted by Bylandersea at 8:12 AM