The U.S. National Park System (NPS) dates back to Yellowstone’s 1872 establishment as the first in what's become a chain of true American wonders.  Lucky for tourists, the number has grown by 2019 to a total of 61 breathtaking living landscapes. Each treasure offers distinctive vistas, climate, wildlife and sometimes otherworldly terrain. Heavily protected, they still provide a variety of recreation facilities for all who visit.

The NPS also manages 419 national monuments and historic sites, ranging from historic homes to buildings, trails, markers, battlefields and cemeteries. The Good Girls give top priority to visiting these NPS sites whenever we travel, but not all produce the highs that the parks offer. Entering some takes cautious, open minds and yields sometimes uncomfortable glimpses of our country’s many-faceted history.

The Good Girls previously witnessed gut-wrenching tales of Civil War prisoners at Andersonville in Georgia. We watched a reenactment of the Battle of Little Bighorn in Montana, an example of a long and brutal conflict with Native Americans. Living in Florida, aka the South, we have encountered numerous sites and museums depicting the struggles for Civil Rights like Brattonsville, SC.

Manzanar National Historic Site in Inyo County, California, 225 miles north of Los Angeles, takes you down a very different pathway to our past. Manzanar functioned a Japanese Internment Camp from 1942-45. More than 10,000 displaced Asians were kept captive there. Of those, 87 percent were American citizens, sent away merely because of their ethnic background and the fears it produced among an American public wrenched into a war it wanted to avoid.

I’m almost embarrassed to admit that I don’t recall learning about the Japanese confinements during my school years. I first caught this agonizing glimpse of the past while reading a novel. Much more than a glance, my trip to Manzanar engulfed me in a history lesson I will never forget.

My first impression on arrival - - a flat desert in the middle of nowhere, backed by barren mountains, far from my daily view in lush, green, and humid Florida. Manzanar coats its scenery with thick dust, little tree or shrub life daring to break through cracked earth. The lack of water makes it impossible to envision the large community once there.

The Japanese attack on Pearl Harbor on December 7, 1941, made a crisis of long-standing hostilities and prejudices of my Americans toward the Japanese. A Franklin Roosevelt order on February 19, 1942, authorized the military to remove “any or all persons” of Japanese ancestry from the West Coast. They were deemed dangerous in an era where fear of potential sabotage and espionage ran rampant. Forced to leave their homes, business and belongings abruptly, many had only days to prepare.

The government eventually deprived over 120,000 people of their freedom, sending them to 10 camps across the nation. Half children and young adults, 10,000 of the dispossessed arrived on buses and trucks at Manzanar War Relocation Center. All they had beyond what they could hand-carry was an identification number assigned to them. Two out of every three were American by birth.

I highly recommend your visit to the site start with a 22-minute movie in the interpretive center. Afterward, look at the exhibits and audio-visual displays; not many structures remain on the property. Then, you can choose to take a self-guided walking tour or 3.2-mile car circumnavigation of the camp, including some reconstructed buildings. National Park Rangers now patrol the grounds, exchanging answers to questions and leadership of tours for threat and confinement.

At its peak, 504 barracks organized into 36 blocks crowded the campgrounds. Each block included 14 barracks, divided into four apartments - - producing individual spaces of only 20-by-25-feet. Any combinations of eight individuals were allotted to an apartment.

An oil stove, a single hanging light bulb, cots, blankets and straw-filled mattresses offered the only furnishings. The space reminded me of a basic scout camp, with single and double cots and lack of other furnishings, and without the promise of returning home in a few short days.

The internees had little or no privacy; mere open spaces comprised the men’s and women’s showers and latrines (as they were called). The reconstructed bathroom on the site tour succeeded in producing the feeling of humiliation those consigned there must have felt many times each day.

The park ranger added to the sense of despair that must have blanketed the place, describing the wicked dust storms that invaded the hastily built barracks. The internees had to stuff socks in the floorboards and windows to keep out the dirt. A small concession, later covering the floors with linoleum helped to ease at least that problem.

Most of the internees worked in the camp. They dug irrigation canals, tended the farms and livestock, made clothes and furniture for themselves or worked within the camp as mess hall workers, doctors, nurses, teachers, etc. Professionals were paid just $19 per month. Modest though these products were, they memorialize the indomitable spirit that infuses us all.

My group walked around the grounds trying to imagine the scene from nearly three-quarters of a century ago. The few visible reminders include concrete outlines of some buildings, former rock gardens, and an old basketball court. A ranger explained that the internees developed their own leagues, clubs, gardens, and activities to help pass the time.

They built a library, published the Manzanar Free Press and operated cooperatives. We stopped into one of the reconstructed mess halls - - I imagined lining up for communal dining three times a day. American- style meals were served, adequately nourishing, but yet another source of alienating the more elderly to whom such food was unfamiliar.

The confinement period lasted for three years, when, in January 1945, the West Coast exclusion order was lifted. Japanese Americans were given  $25 and a bus ticket to wherever but they were not allowed to own land in California. Many had nowhere to go and no jobs anymore. The last internee, a four-year-old boy, left Manzanar on November 21, 1945. By March 20, 1946, all 10 war relocations centers across the U.S. were closed, ending a dismal chapter in America’s past.

While we can’t change history, this site forces us to remember some of its darkest acts. The United States may be called the land of liberty, but it has not always held itself consistent with the definition. Manzanar forces visitors to remember the protections promised in our Constitution and the consequences when we ignore them. 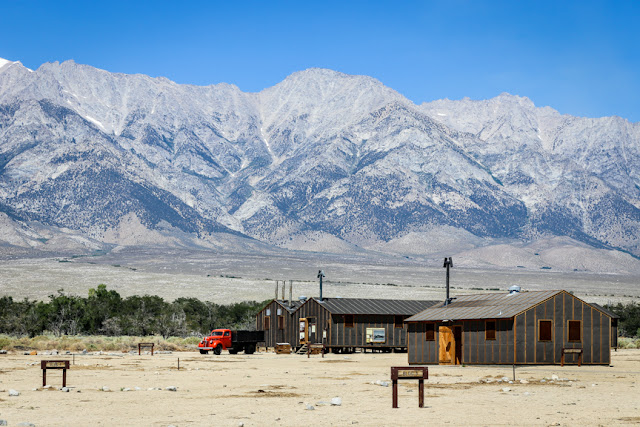 Admission is free.
Manzanar became a designated California historic site in 1992. The Interpretive Center opened in 2004. The official purpose of the Manzanar Historic Site is to preserve Manzanar’s cultural and natural resources and interpret the forced removal and incarceration of Japanese American and Japanese immigrants during WWII.

Posted by Bylandersea at 6:32 AM